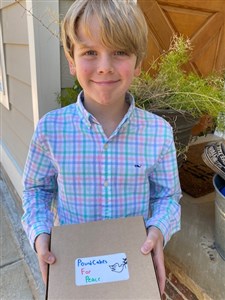 When 9-year-old Senoia UMC member Smith heard about the crisis in Ukraine he wanted to do something to help. Today, with a kitchen (and family) covered in flour, he's sold nearly 50 pound cakes to raise funds to support the humanitarian work of UMCOR.

"Smith is the youngest of our four sons," said Smith's mom, Emily Wilson. "We have had many dinner discussions about the horror that is taking place in Ukraine. Our pastor [Rev. Ashley Jenkins] has talked about UMCOR in church and how they are helping feed and cloth people who have lost everything. As a church, we have been taking up extra offerings to contribute. Hearing about all the hurting Ukrainians, Smith felt the need to do something to help. His first thought was a lemonade and cookie stand, but then he had the idea to sell his Mimi’s pound cakes.'"

Smith said, "Mom, who can resist Mimi’s cake? It is the best pound cake in the world!” So he called his grandparents and shared his idea with them. “Poundcakes for Peace” was born!

He sold 33 cakes in just two days, followed by an order of 13 more cakes. Smith is selling his cakes for $18 and bags of icebox cookies for $10. Both are family recipes that have been passed down through the years.

With four boys, it's not unusual for the Wilson family to be in the kitchen and Smith always likes to help.

"His Mimi and Papa are fantastic cooks and both love to bake," said Emily. "Smith has grown up hanging on all of our apron strings."

It's no surprise that the Jenkins Family was proud to support this inspiring 3rd grader. They have already received their cake!