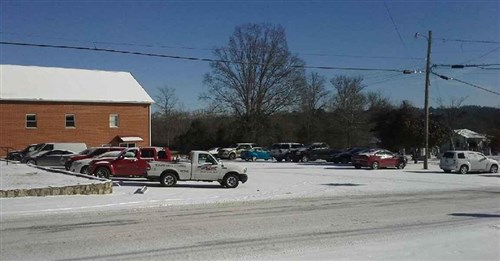 United Methodists were both recipients of hospitality and offered hospitality to friends and strangers in the winter storm that paralyzed parts of metro Atlanta Jan. 28 and 29.

Bishop Mike Watson and Atlanta-Roswell District Superintendent Dan Brown left a meeting at the Cathedral of St. Philip Episcopal Church in Atlanta Tuesday afternoon as the storm began. After nearly six hours, they had made it to a busy Norcross intersection -- 3 miles from home for each of them -- where they sat at a stand-still for two hours. They knew they were not going to make it home. It was then that Helen and Rev. John Simmons of St. James UMC Atlanta opened their home to them. They were just a short distance away.
"We spent last night here. They welcomed us and had soup last night to warm and feed us," said Brown. "This morning we were listening to the news and heard reports of parents with small children stuck in their cars all night with no food, no water, and no facilities. My heart goes out to them."

Wednesday morning, Douglasville First UMC served hot pancakes to stranded commuters who stayed the night at the church and three more came early Wednesday morning. Rev. Scott Hughes was able to get one gentlemen home. Other motorists made it to the church later in the day.

Rev. Jenny Anderson of Cumberland UMC offered and received hospitality in the storm. She spent several hours getting the eight miles to pick up her daughter from a babysitter's house. But roads were blocked on their way home and they didn't make it far before they turned back and spent the night at the sitter's. She was there when she heard from Rev. Elaine Wilder of Marietta First UMC. Wilder's husband was stranded near Cumberland. Anderson's husband had just gotten home and offered him a room at their house for the night.

Rev. Jim Moore gratefully received a ride back to Maple Avenue UMC in Marietta when he realized he would not make it home. Back at the church, he was joined by several of the church's preschool staff also stayed the night with the children whose parents were unable to pick them up. By word of mouth, several more stranded motorists made their way to Maple Avenue UMC for a warm place to stay and sharing food together.

Others who quickly responded and offered warmth as an emergency shelter include Martha Brown UMC in East Atlanta, Reinhardt College, and Acworth UMC.

Cannon UMC shared the following prayer that all North Georgia United Methodists can join in praying:

Share with us the stories of hospitality from your church or members in the comments below or by emailing communications@ngumc.org.

(Photo courtesy of Boynton UMC where many neighbors parked their cars and walked home.)
News