Henry-Crowe to be installed as GBCS General Secretary Feb. 27 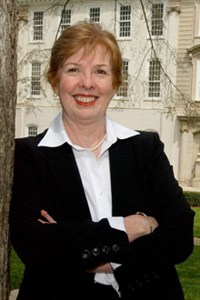 By General Board of Church & Society

The Rev. Dr. Susan Henry-Crowe will formally be installed as General Secretary of the United Methodist General Board of Church & Society (GBCS) during a worship service Thursday, Feb. 27. The installation service will take place at 7 p.m. at Chevy Chase United Methodist Church here.

The installation of Henry-Crowe as chief executive of GBCS, one of four international general program boards of The United Methodist Church, will occur during the Feb. 26-March 1 spring meeting of its Board of Directors. Prime responsibility of GBCS is to seek implementation of the Social Principles and other policy statements on Christian social concerns of the General Conference, the denomination’s highest policy-making body.

Henry-Crowe succeeds James Winkler, who was GBCS chief executive for 13 years. Henry-Crowe officially assumed her new duties Feb. 10 after 22 years as Dean of the Chapel & Religious Life at Emory University in Atlanta. Her office will be in GBCS’s headquarters in the United Methodist Building on Capitol Hill in Washington, D.C.

“Under Dr. Henry-Crowe’s leadership, we will build on GBCS’s strong legacy of advocacy for social justice,” Bishop Robert Hoshibata, GBCS board president said. “I am confident that we will also create a clear direction into the future of the board and its ministries of connecting people in the pews with the concerns and needs of persons and communities in the global context in which we live.”

Henry-Crowe said she is committed to the long-established ministry of GBCS through advocacy, education and justice-seeking. “The opportunity to support the communities and lives of real people around the world in their struggles for justice is the call of the Gospel of Jesus Christ and one in which I am privileged to serve,” she said.

GBCS’s Board of Directors consists of 63 members located around the world. The board’s spring meeting is being held at the National 4-H Youth Conference Center, which is across Connecticut Ave. from Chevy Chase United Methodist Church.

During the meeting, GBCS’s directors will meet in administrative committees to address issues of finance, trustees, personnel, leadership development, and biblical and theological interpretation. They also will meet in work areas focused on Alcohol, Other Addictions & Health Care; Economic & Environmental Justice; Human Welfare; and Peace with Justice/United Nations & International Affairs.

Grant awards will be considered by the directors during the meeting for ministries related to Ethnic Local Church, Peace with Justice, and Human Relations Day.

As Dean of the Chapel & Religious Life at Emory, Henry-Crowe conducted a ministry to and with a diverse constituency of 12,000 students and 2,400 faculty members. She focused on interfaith and ecumenical work, mentoring and vocational formation of a new generation for social-justice ministries, and stewardship and fundraising.

For 16 years, Henry-Crowe served as a member of the United Methodist Judicial Council, the denomination’s “Supreme Court.” She is the first woman elected president of the Judicial Council, serving in that role from 2008-2012.

Henry-Crowe was ordained an elder and continues to be a member of The South Carolina Annual Conference. In South Carolina she served in three pastoral appointments, and as Associate Director and then Director of the Conference Council on Ministries.

A clergy delegate to three General Conferences, Henry-Crowe served on the Legislative Committee on Administrative Order, helping to examine and write the legislation on membership of boards and agencies, and on the Committee on Plan of Organization & Rules of Order.

Recipient of a Master of Divinity degree from Candler School of Theology at Emory, Henry-Crowe also holds a Doctor of Divinity from LaGrange College. She has served on the Board of Trustees for Claflin University, Columbia College and Santiago College.

In 2000, she was named Chaplain of the Year by the General Board of Higher Education & Ministry. She also has been recognized for her work in her commitment to social justice.

The United Methodist General Board of Church and Society, headquartered in Washington, D.C., is that agency of the church charged with promoting the church’s social witness, and to help all United Methodists connect their faith with the broader society.