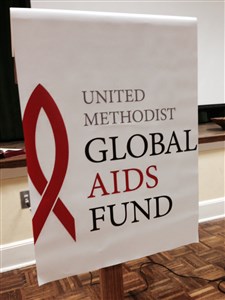 The cost of treatment that prevents the transmission of HIV from mother to infant is $10. Yet every day, 900 babies are born with HIV. This fact underscores how even a small gift can make a big difference to one person living with HIV or AIDS.

It was with this information as its focus that the Global AIDS Fund (UMGAF) gathered for a meeting in Atlanta this week.

As part of that gathering, the committee held an event, “Just Save One,” to inspire and inform North Georgia United Methodists to be a part of eradicating HIV and AIDS around the globe. Rev. Beth Larocca-Pitts, pastor of St. Mark UMC in Atlanta where the event was held, welcomed the committee to North Georgia. “We are so happy for what the committee does worldwide,” she said.

“There are 35 million people with AIDS. These are people, not statistics,” said Messer. “No child needs to be born into the world with HIV.”

Messer says there are two problems in the way of eradicating HIV and AIDS: “indifference and intolerance.” And the solution, he said, lies in education, prevention, care and treatment.

The Global AIDS Fund was established by the 2004 General Conference and since has supported 266 projects world-wide.

Two other members of the UMGAF committee shared their stories. Patrick Abro from Cot’d Ivoire, and Rev. Dr. Anne Gatobu, originally from Kenya, each spoke about seeing the real impact in their home countries from the support of the fund.

When Gatobu, who is now a professor at Asbury Theological Seminary in Kentucky, returned to her home village for a funeral, she began asking her mother about her childhood playmates. One after the other, her mother told stories of their deaths. It felt like her whole generation had been wiped out.

“It got me thinking, what about their children,” she said. That was 2001. In the next several years she began working to make a difference. Slowly, with the help of a local group of women and the Global AIDS Fund, stigmas began to be broken. These women became a bridge to help for families affected by HIV and AIDS.

Mary Lawder, Faith Community Nurse for the Atlanta Roswell District of the North Georgia Conference, spoke to the group about HIV and AIDS in Georgia. Our state is sixth in the nation for total numbers of people living with HIV and AIDS.

“Let us pray and work that HIV and AIDS are eradicated by 2020,” said North Georgia Bishop Mike Watson to the gathering. “Let’s pray for those infected with the virus and those affected by the virus.”

This work is right down John Wesley’s path, he went on to explain.

He shared that Emtriva, a vital drug in the treatment of HIV, was developed at United Methodist-related Emory University, right here in North Georgia.

“This is the kind of thing a great church can do,” said Bishop Watson.

Though the Global AIDS Fund is only 10 years old, Bishop Woodie White spoke of some of the history of the church’s work against HIV and AIDS.

In 1988 White, now retired and in his tenth year as Bishop in Residence at Candler School of Theology, suggested to the Council of Bishops that they needed to say something about AIDS. He was given the task of writing a statement.

“In May of 1988, Bishop Bevel Jones and I presented a paper,” Bishop White told the group. “The only research available at that time was the Surgeon General’s report.”

After some debate, the bishops unanimously adopted that statement, but Bishop White doesn’t think it ever left the room. It was graphic and the topic was emerging and misunderstood.

Bishop White read from the paper, beginning: “It is not a sin as many claim. It is a virus.” He went on to read:

“We have the opportunity and responsibility to show the love of Christ to people with acquired immune deficiency syndrome, their families and their loved ones.”

“This task force is doing just that,” he said, before presenting a copy of the statement to Linda Bales Todd, co-chair of the UMGAF.

To support the work of the Global AIDS Fund by donating, educating your congregation or becoming involved as an advocate for persons living with and affected by HIV and AIDS around the world: