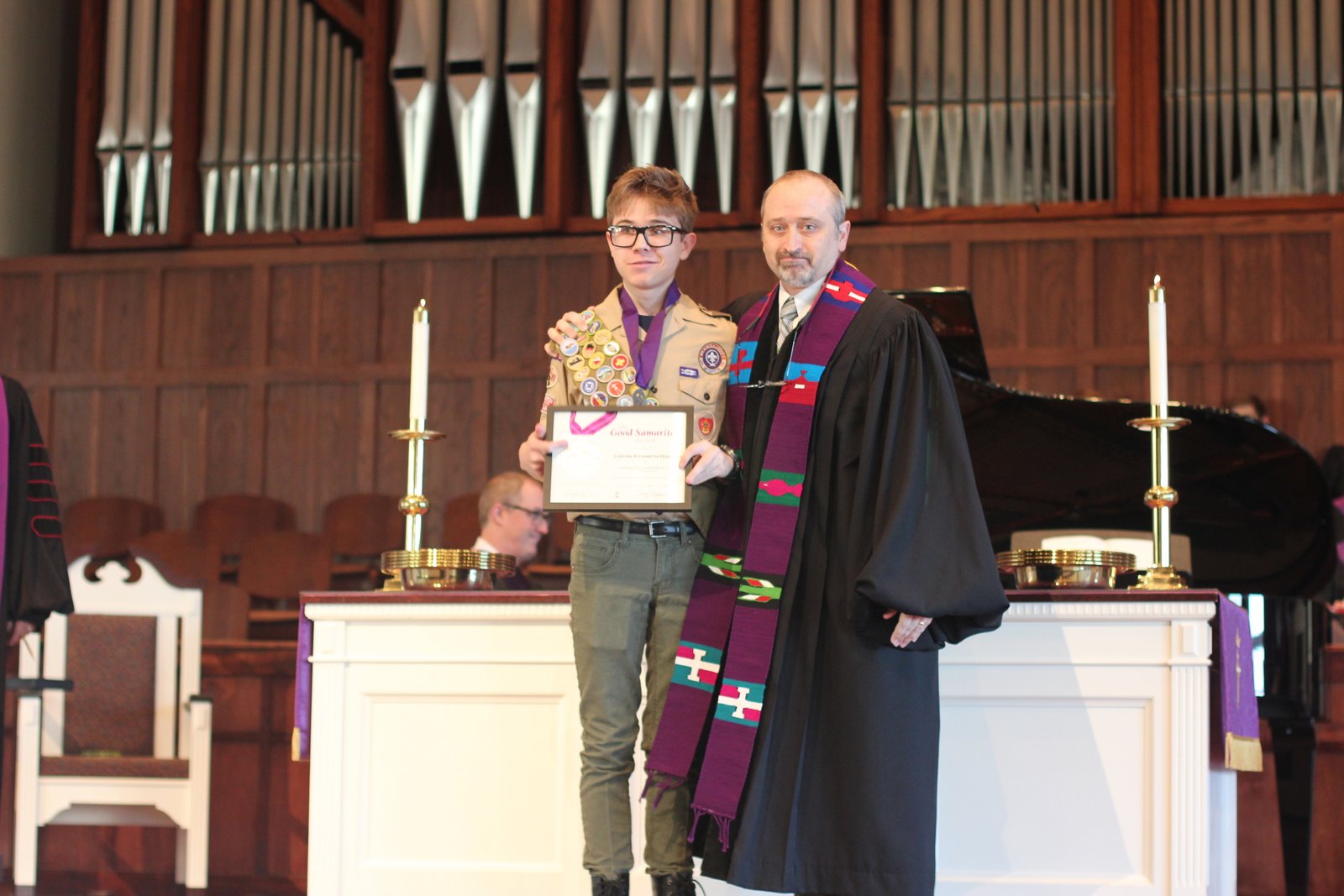 Logan approached the Children’s Ministry staff of Kristy Thompson and Cherie Perkins about helping.  They welcomed Logan to the team.  Having Logan’s leadership opened up new opportunities for ministry at Kid’s Kingdom.  The children have a young person to look up to as a role model. There are several children who are now attending Kid’s Kingdom, only because of Logan’s ability to make them feel comfortable.  Logan has a kind spirit, nurturing heart and dedication that has given Kid’s Kingdom a place for children who have trouble finding ease in group activities.

Not only does Logan offer leadership to children, but adults as well. Logan offers creativity to activities, making suggestions and always lending a helpful hand. There is rarely a Sunday that Logan misses being present at Kid’s Kingdom.  When he is gone, the children all anticipate his return the next week.  Logan has shown the true character of Scouting as he gives unselfishly to others.

Bark For Life Event at Covington First UMC on March 29th
Newton County’s First Annual Bark For Life will take place March 29th from 1pm-3pm. The American Cancer Society Bark For Life is a fundraising event honoring the life-long contributions of our Canine family. It presents an opportunity for people to be empowered through their canine companion partnerships and to contribute to cancer cures through the mission of the American Cancer Society. Dogs and owners alike participate to celebrate cancer survivorship, to honor people lost to cancer, and to fundraise in support of the American Cancer  Society mission of eliminating cancer though research, education, advocacy and service.

Glenn Chancel Choir Concert Cries for Mercy Sunday, March 30, 7:00 PM
The Glenn Chancel Choir presents their spring concert Sunday, March 30, 7:00 PM in the sanctuary of Glenn Memorial United Methodist Church. Titled “Cries for Mercy: Kyries of Bach, Mozart, and Beethoven,” the concert will also include the complete Mass in C by Beethoven with professional orchestra and commentary by theologian Albert Blackwell. The two hour concert, with intermission, is free – an offering will be taken. For more information see www.glennumc.org/music.  Contact: Nancy Buckhannannancybuck315@gmail.com (404) 272-2051

The concert will include Kyries by three of the world’s greatest composers: Bach – Kyrie from the Mass in G Minor, BWV 235; Mozart – Kyrie in D Minor, K. 341; and Beethoven – Kyrie as part of the entire Mass in C, op 86. This concert will not only offer the performance of these timeless works, but it will also, via commentary from Dr. Blackwell, show how each composer fashioned a unique cry to God and Christ for mercy, while exploring the unique power of music for theological communication. After the concert concludes, for those wishing to remain, Dr. Blackwell will give a brief exploration of contrasting musical-theological characteristics of Bach, Mozart, and Beethoven, followed by a brief period of discussion.

The Chancel Choir of Glenn Memorial Church will sing with orchestral accompaniment, including Emory’s Vega String Quartet and members of the Atlanta Symphony Orchestra. Timothy Albrecht, Emory University organist, will accompany the Mozart and play continuo for the other works. Soloists for the Beethoven will be Alexis Lundy, Cynthia Shepherd, Timothy Miller, and Stephen Ozcomert. Steven Darsey will conduct.

Action Ministries Hosts “Hunt for Food” Event April 12th
Action Ministries is inviting everyone to collect and donate peanut butter, jelly, canned fruit and soup for their special food drive event on April 12th. Participants come bring their items to Action Ministries, located at 2160 Hills Avenue (Suite F), Atlanta, GA 30318, from 12PM to 4PM. A prize will be awarded to the largest donor.