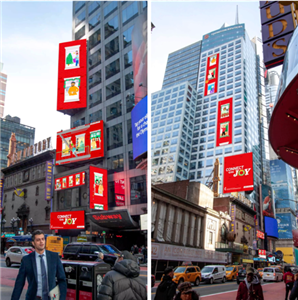 The bustling holiday crowds in Times Square and interstate travelers in the North Georgia Conference (and many in between) will see an invitation from The United Methodist Church in the weeks leading up to Christmas: Join us this Christmas, as we connect with a song in our hearts. Generosity of spirit. And with faith, hope, and joy.

This is part of the “Connect with Joy” Advent campaign across the U.S.

Placed by United Methodist Communications, there are 11 Advent invitation billboards in North Georgia (8 in English, 3 in Spanish). They're found on I-75, I-85, I-285, I-20, Jimmy Carter Blvd., and Peachtree Industrial Blvd. The billboards complement social and digital media advertising, including, for the first time, TikTok.

Times Square is the centerpiece of the campaign. New York City is a top travel destination in December, and Times Square is among the most visited attractions. Times Square is called the Crossroads of the World for good reason. Nearly 360,000 pedestrians pass through every day in a typical year. The area is so brightly illuminated that it can even be seen from the International Space Station.

From November 28 through Christmas Eve, United Methodist Communications will be airing messages on a mosaic of nine high-impact synchronized digital screens – over 8,800 square feet of signage – just outside Manhattan’s busiest subway station. Complementing the jumbo animated ads at Times Square and 42nd Street will be an additional 74 subway digital boards.

The “Connect with Joy” campaign reminds all that the hope, love, and joy we celebrate at Christmas is already present in the world – and we can connect to it right now, together.

It’s been almost two decades since The United Methodist Church’s ads were first featured in Times Square in November 2003 – but not without controversy. Reuters initially rejected the advertising on its 28-floor, 7,000 square-foot electronic billboard after United Methodist Communications signed a $30,000 contract with its outdoor advertising agency, citing a policy against religious advertising.

Appeals from United Methodist Communications and the National Council of Churches expressed concern that religious organizations should have the same rights to speak in the marketplace as companies selling commercial products. In the wake of the publicity that followed, Reuters’ chief executive reversed the decision in a letter in which he said the company had reconsidered its position and apologized. Thus the story had a happy ending. In an even bigger campaign two years later, United Methodist ads were in full view when the Macy’s Thanksgiving Day parade rolled by Times Square.

“While the Times Square messaging remains a major component of this year’s Advent welcoming campaign, there’s much more,” said Dan Krause, chief executive of United Methodist Communications. “English and Spanish-language billboards in 13 U.S. cities depicting a Nativity scene will reach motorists traveling the nation’s highways. And we hope to reach a younger audience with the new spot for TikTok and Snapchat, as well as other social and digital media advertising.”