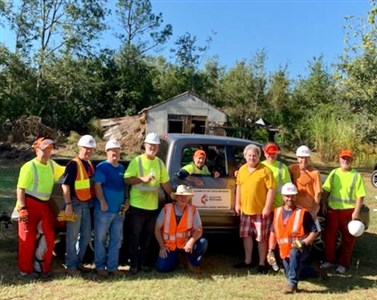 On the week of the one-year anniversary of Hurricane Michael, Alpharetta First UMC sent a team to southwest Georgia to serve in the hardest-hit areas of Donalsonville.

They were hosted by Friendship UMC in the South Georgia Conference. The Friendship UMC congregation has been a model of radical hospitality this year, opening the church doors to disaster teams, including many from North Georgia and our own Bishop Sue Haupert-Johnson.

"I can say without a doubt that Alpharetta Methodist is the 'Gold Standard' for relief teams," said Billy Williams, host manager of lodging for the church.

Read more about the anniversary of Hurricane Michael and the role of UMCOR and The United Methodist Church in the recovery in this feature in the Georgia Recorder: https://georgiarecorder.com/2019/10/10/hurricane-michael-hangover-lingers-one-year-later-in-sw-georgia