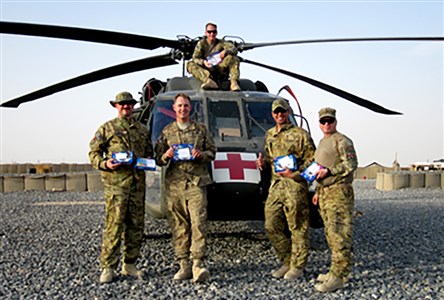 Alpharetta First United Methodist Church is collecting five tons of Oreo cookies to send to U.S. armed forces serving in the Middle East and is asking for the community’s help. The cookie drive is part of the church’s annual Operation Oreo, which provides service members with a taste of home. It’s a simple way to say thank you to those who stand in harm’s way.

Oreos received by the church over its target of five tons will be delivered to the Atlanta Veterans Hospital in Decatur.

The cookie drive began on June 1 and concludes on Sunday, July 2. That Sunday stacks of Oreo packages will surround the altar, the choir will perform patriotic music, and active duty and military veterans will be honored during each of the church’s four Sunday worship services.

To participate in Operation Oreo and show your gratitude to our military, please bring Oreo packages to Alpharetta First UMC, 69 North Main Street in downtown Alpharetta by Friday, June 30 at 4 p.m. You may also place them at the altar on July 2 at each worship service. Please attach a thank you note to each package to ensure that service men and women will know how much they’re appreciated.

Operation Oreo began in 2009 with a chance encounter between Senior Pastor Dr. Don Martin and a young soldier aboard a plane. The soldier was returning from duty in Iraq. When Dr. Martin asked him what he missed most while away, the young man replied, without hesitation, “Oreos, Double Stuf!” Every summer since then, Alpharetta First UMC has collected and shipped packages of Oreos to service men and women overseas.

In conjunction with Operation Oreo, Alpharetta First is also joining forces with Habitat for Humanity—North Central Georgia to repair the home of an Air Force veteran. Homeowner Mary Ellen Wilcox served in the Air Force nearly 60 years ago, between World War II and the Korean War. Repair work began on her Alpharetta home in April, when members of the church joined with Habitat for Humanity work crews for the Alpharetta Great Day of Service. On Saturdays in June, July and August, volunteers will install insulation, drywall and siding, and then paint Mrs. Wilcox’s home and landscape her yard.