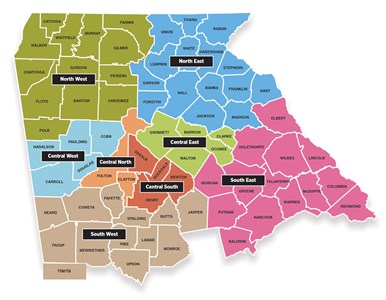 Members of the 2020 North Georgia Conference adopted and put in place the final steps to implement a new 8-district structure for our Annual Conference.

The 8 new districts are more reflective of today’s North Georgia Conference and the communities we serve. The districts follow county lines and each contains a similar number of churches. Every new district includes some high-growth counties. Population, as well as population growth, is balanced between the districts. And 6 of the 8 districts have a United Methodist-related college or seminary in its bounds.

"The new plan makes sense," said Conference Lay Leader Bill Martin. "This plan, especially keeping counties together, will help further our mission and ministry. As a District leader, it will be very helpful when you sit and talk with county officials to be able to say that you represent the entire county and just not some portion of it."

The change will save the Annual Conference upwards of $1 million annually.

The new districts are:

Each district has or will soon hold its first set-up meeting to elect district leaders and to incorporate new District Unions.

Read more about the redistricting process at https://www.ngumc.org/district-restructure.