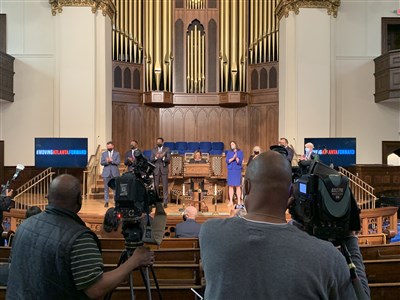 “Lord, have your way in this place. Bring a fresh anointing.
Show us the impossible because you make all things possible.
We give you all the honor, glory, and praise”
—Rev. Jasmine Smothers, prayer before a Faith Leaders Summit on Affordable Housing

The press conference was followed by a summit for leaders of Atlanta area faith communities on resources available through public-private partnerships in the work to build permanently affordable housing. The summit was well-attended by Atlanta United Methodist clergy.

At both the press conference and the summit, Rev. Jasmine Smothers, pastor of Atlanta First UMC, announced the church's plans to build two towers of affordable, attainable housing on church property. Church members' and leaders' hospitality and vision were on display as they welcomed both the press and the faith community.

“I am honored to be standing in this place, 175 years young,” began Mayor Dickens. “Rev. Jasmine, I'm so proud of you, from Southwest Atlanta just like me, and now we’re right in the heartbeat of downtown Atlanta working together on affordable housing.”

The mayor announced his commitment to 20k units of affordable housing in 8 years and called on houses of worship to help with 2,000 of those units.

The launch of the initiative included major commitments from Wells Fargo Bank and Enterprise Community Partners. 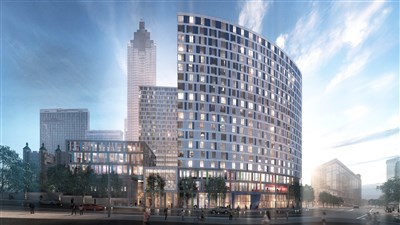 Atlanta First UMC’s Development Task Force was formed in 2018 by the Church Council to seek the best and highest use for the church’s 360 Peachtree Street property. Its goal was to envision and implement ways for the church and Atlanta First Day School to live into its future in innovative ways as we worship God, serve people, grow together, and engage the city of Atlanta and beyond.

Rev. Smothers first had the idea to pursue affordable housing at a North Georgia Conference "M-Lab" ministry innovation event in 2018. Attendees were called on to dream and pitch a God-sized ministry idea to the group. The vision that began that day took hold, not only with Rev. Smothers but with Atlanta First UMC leaders and the congregation.

“Atlanta First has a proud history of impacting the city for good,” said Rev. Smothers. “The church has 2.8 acres in the middle of the City of Atlanta. We have chosen partners that hold our core values. If it doesn’t ‘worship, serve, grow, or engage,’ we don’t do it here.”

Today that vision is coming to fruition in a two-tower complex design which will include approximately 320 units of housing, 85 percent of which will be affordable (192 units at 31 to 60 percent average median income and 80 units at 30 percent AMI via a partnership with Atlanta Housing). The property will include one-bedroom, two-bedroom, and the first three-bedroom apartments in the downtown area.

"These numbers are important because these numbers represent people," said Terri Lee, Chief Operating Officer and Chief Housing Officer of Atlanta Housing (and a member of Impact UMC).

The project will create new spaces for the Atlanta First Day School, a Georgia Pre-K and K-5 school, as well as a new fellowship hall, gymnasium, church classroom space, and administrative offices. The site will have approximately 260 parking spaces, with dedicated spaces for the church, school, residential, and retail, and the balance paid parking. 10,000sf of retail space will run along the ground floor on the corner of W. Peachtree St. and Ivan Allen Blvd.

Atlanta First will retain ownership of the property, a point Mayor Dickens emphasized as essential in ensuring that the housing is permanently affordable.

“The faith community can be a God-send,” said Mayor Dickens at the summit. “Learn a lot today and take it back to your trustees. Meet partners like Invest Atlanta and the Atlanta Housing Authority. I believe in the institution of the church and I’m proud of this church that has plans to build affordable housing on Peachtree Street.”

What does it take?