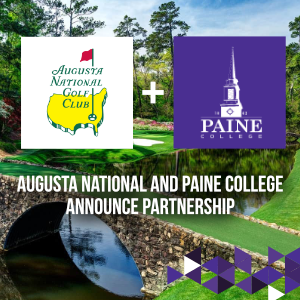 The Augusta National Golf Club announced this week that it will fund the creation of a women's golf program at United Methodist-related Paine College and endow scholarships named for Lee Elder, the first African American to compete in the Master's Tournament 45 years ago.

At a press conference at Augusta National, Chairman Fred Ridley revealed the creation of the Lee Elder Scholarships at the Historically Black College. Two scholarships will be awarded annually, one each to a student-athlete who competes on the men's and women's golf team.

"Augusta National Golf Club has been a supporter of Paine College for many years, and we are excited to build an even closer relationship through the game of golf," said Paine College President Dr. Cheryl Evans Jones. "The endowed Lee Elder Scholarships and the creation of a women's golf program are now a permanent example of the Club's investment in our institution and will open doors for our students for years to come. We appreciate receiving this support and recognition and look forward to working with Augusta National on initiatives that will positively impact everyone affiliated with Paine College."

Ridley also shared that Elder had accepted a special, one-time invitation to join Gary Player and Jack Nicklaus as an Honorary Starter for the 85thMasters Tournament on Thursday, April 8, 2021.

"It also gives me great pride to know that my first Masters appearance continues to make a positive impact on others," said Elder. "Throughout my career, helping young men and women achieve their dreams through education has been a cause close to my heart. I am deeply honored to share a connection with Paine College and these scholarships, which will provide life-changing opportunities for the deserving recipients."

Elder first competed in the Masters in 1975 and would later qualify for the Tournament for five consecutive years, 1977 through 1981. His best finish came in 1979, when he tied for 17th place.


About Paine College
Paine College, founded in 1882, is a private Historically Black College and University (HBCU) steeped in the tenets of Methodism that provides a liberal arts education of the highest quality. The College emphasizes academic excellence, ethical and spiritual values, social responsibility, and personal development to prepare spiritually centered men and women for positions of leadership and service.