Being One With Each Other: Learning from Rev. Dr. Gary Mason 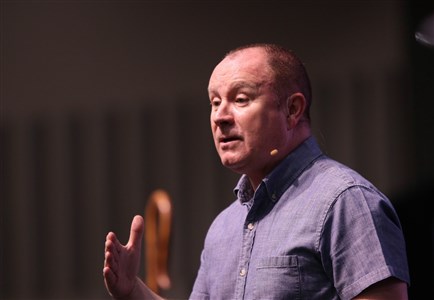 Mason shared his own story of having lived through violent conflict in his hometown of Belfast and his role in the Northern Ireland Peace Process.

He shared theological and biblical foundations for peacemaking, conflict resolution, and reconciliation. And he explained how toxic theology fanned into the culture and allowed people of faith to eventually kill one another.

It began, he said, with the teaching of contempt.

“People have hated in the name of the God of love," he said. He cautioned us to be careful of the powerful nature of religion to move people

“Religion is like fire, it warms but it also burns," he said. "And we are the keepers of that flame.”

He shared insight into how we can accomplish this difficult task, beginning with learning to "disagree better" and see our own shortcomings.

“Everyone thinks Jesus is just like them,” he said citing a study where participants were asked questions about what they thought Jesus' personality was like. Then they were asked in a follow-up question to describe themselves.

Calling on North Georgia United Methodists to bring grace to their communities, he quoted George MacLeod:

I simply argue that the cross be raised again
at the centre of the marketplace
as well as on the steeple of the church.
I am recovering the claim that
Jesus was not crucified
in a cathedral between two candles
but on a cross between two thieves
on a town garbage heap;
at a crossroad of politics so cosmopolitan
that they had to write His title
in Hebrew and in Latin and in Greek …
and at the kind of place
where cynics talk smut,
and thieves curse, and soldiers gamble.
Because that is where He died,
And that is what He died about.
And that is where Christ’s own ought to be,
And that is what church people ought to be about.

He implored us to open our eyes to the world around us. "I want a theology that spills into the public space," said Mason. "Escapism has nothing to do with Biblical Christianity."

Mason gave North Georgia United Methodists pointed advice.  "My final appeal is this," he said in closing. "You need to hear each other better."


Videos: Being One With Each Other with Gary Mason