Better Together: Two Churches Find They are Better Equipped to Serve Their Community as One 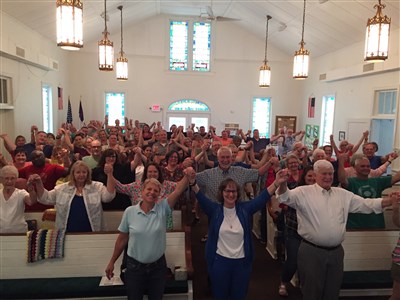 1/28/2020
Members of Woodstock UMC and City on a Hill join hands as they vote to join together as one congregation!

When Rev. Ann Garvin’s District Superintendent Rev. Doug Thrasher asked her to consider starting a dialogue about a potential merger with another UMC, Woodstock UMC was a fairly small congregation with about 35 attendees each Sunday. The church also had three under-utilized buildings, but a faithful congregation that had been creative in keeping the church going. That was October 2018.

At that same time, the congregation of a nearby new church plant, City on a Hill UMC, was toiling over what they would do when their current lease at a library would expire in 2019. The church had about 200 members and was a younger congregation.

Like Ann, City on a Hill Pastor Rev. Andy Rogers was contacted by his DS, Rev. Terry Walton, with a suggestion they start a dialogue with Woodstock UMC.

Doug’s and Terry’s joint vision was that these two congregations had a lot to offer one another.

City on the Hill couldn’t fully serve the area without a more sustainable home, and Woodstock had underutilized space.

“When the four of us initially met, it started in prayer,” Andy explains. “I believe firmly in the power of prayer, and the Holy Spirit convinced us to do this.”

So, the two congregations started doing activities together. They first worshipped jointly the following Ash Wednesday, then took part in joint mission projects on the Woodstock church grounds.

The merger of these two churches melds together a rich history that spans over a century and a vibrant, young church plant. One of the reasons Andy and Ann knew the timing was right was that their coming together happened at the same time Woodstock was evolving into a completely different city.

“We are now better equipped to serve this new community,” they both say.

Not to lose the spirit of worship that was held at each of the churches, the newly combined church has two services – one contemporary and one traditional, explains Ann.

“It’s truly the best of both worlds,” she said.

They had initially intended on waiting for the build-out of a new space for the contemporary service to launch, but the sanctuary at Woodstock UMC is currently housing both expressions.

“Sure, sharing the space has made us a little crowded, but it also has made us get used to having a full sanctuary,” she adds. “Both the services have blended and grown. Being in the same space, even at different times, enabled everyone to embrace the fact that we are better together.”

Andy and Ann both acknowledge that the congregation might have remained two churches if City on the Hill had extended their lease until the other building was built out.

“Our leadership was bold enough to see that it was important to go ahead and come together in one space,” says Andy.

But of course, there was a lot of apprehension, he explains. Consistent among both congregations were concerns over identity and name, expression in worship, and leadership. One thing that put members at ease was that they immediately shared leadership roles and finances.

“Mergers are not easy. But Ann and I showed true mutual respect and I think that built a level of trust among the congregants,” explains Andy. “If it had not been for someone like Ann to work with, it would have been very difficult. God brought the two of us together with our shared values, and nature and character to help two communities discover what the next season will look like.

“There is kingdom work ahead of us that could not have been achieved if God had not brought us together,” Andy explains.

Andy and Ann also give much of the credit of the success of the merger to the support of the connection offered by District Superintendents as well as other nearby UMC’s that reached out to help. “We have a blessed connectional system,” Andy said.

Both congregations gained new members during the months of the process toward merger.

December 1, 2019 was the day of their first service as one church. Since then, the church has held a baptism and there are six people committed to join. The merged churches plan on taking on a new identity, because they know they are indeed better together, according to Ann and Andy. Both congregations want the new church to reflect that.