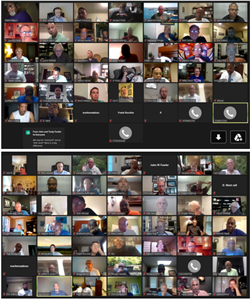 This summer dozens of men from St. James UMC in Alpharetta and Alpharetta First UMC joined together for a series of Bible Studies and discussions on race and reconciliation. They had deep and difficult conversations across Zoom, but the results were incredibly impactful on participants from both churches.

St. James's congregation is predominantly Black and Alpharetta First UMC members are predominantly White. The two churches are less than a mile apart and members of the churches cross paths in their subdivisions and community. In fact, two men (one from each church) who are neighbors and pass each other on daily walks, wondered if there might be an opportunity for their respective men's groups to work together.  They introduced Kem Fleming, chair of St. James' Men's Ministry, to Chris Day, chair of Alpharetta First Men's Ministries.

"With the current climate in our society, we thought it might be the right time for us to talk about race and faith," said Kem.

Together, leaders from the two churches put together a four-week Bible Study series.

"The Bible study met at night virtually," said Kem. "The men came the first week ... the second week .. the third week. We had some tough conversations, but for the entire series, we had an average of 50 to 60 men on each call. We had great dialogue and great biblical instruction on racism."

Leaders from the two churches took turns leading the lessons, then men broke out in groups in 4 or 5 for conversations.

"The participants experienced tremendous personal growth from the series," said Chris. "We all have different backgrounds and perspectives and it was great to share and hear those in a gathering of Christian men. Conversations were difficult at times, but we were actually having them rather than avoiding them as we might have in the past."

"Honestly, I was concerned about getting on to tough subjects, but Chris said, 'no, I want to have these tough conversations,'" shared Kem.

At the end of the four weeks, everyone was curious about what next, so they decided on a one-day summit in November. They two churches have just begun planning.

"Some of the retired guys talked about meeting for coffee before then," said Kem.

The session was so fruitful that the men of St. James reached out to another neighboring congregation, Mount Pisgah UMC, to launch a similar series.

"This showed us how great it is to support each other," said Kem. "I enjoyed it from the bottom of my heart."