Second in series of stories from growing congregations around the North Georgia Conference. 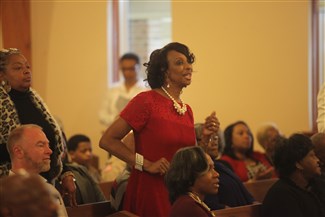 In 2015, there were about 25 people in the pews on Sunday morning. Today, between 250-300 worshipers attend on an average Sunday at Cliftondale UMC and church pastor, Rev. Kevin Murriel, has witnessed around 100 professions of faith in just two years.

The congregation has devoted its time to reaching out across several generations throughout the College Park area. As a result, they have seen tremendous growth in, not only worship attendance, but also small groups attendance, membership, and social justice involvement.

“I attribute all of our growth to the Holy Spirit,” Murriel says, “it’s contagious.”

The congregation has used several ministry platforms to spread the work of the Holy Spirit around the community.

Several Cliftondale small groups step outside the box of normal bible study protocol. The senior small group, “Mind, Body and Soul,” kicks off with line dancing before diving into discussion. The young adult small group meets on the Morehouse College campus, and can be watched live online. Through the internet and college connections, they’ve formed a following that extends across the Atlanta area. In 2017, Murriel hopes to start a Christian Singles group for those who are over 30. It would be open to those who have been divorced, widowed, or simply don’t have a partner.

“Small groups have been essential to Cliftondale,” the pastor says, “If a church wants to grow, then they should put time into developing small groups.”

Like many churches, Cliftondale UMC also strives “to get Sunday morning right.” Murriel says that requires a personal touch. Congregants can volunteer as Ministry Ambassadors, a job that consists of calling new visitors and new members to simply thank them.

The church also extended its community reach through its 8:30 pm time slot on the Atlanta Interfaith Broadcasters Network (AIB) on Sunday evenings. Atlantans can tune in to this channel to watch a live sermon from home.

Every year, Cliftondale tries to focus on a theme. In 2016, it was spiritual maturity. This year, the congregation is focusing on breakthroughs and resetting priorities. Murriel leads themed discussions like one would lead a theology course, allowing participants to dig a little deeper than on Sunday mornings. Those who attend most of the discussions even receive a certificate of completion. It’s gained a lot of attention in the area and in the congregation.

“Our main focus is to remain biblically astute and socially conscious,” Murriel says. 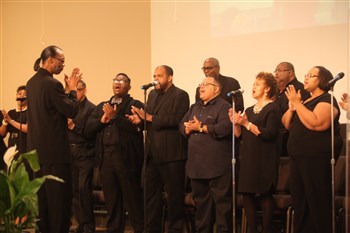 He wants the congregation to not only know the bible, but also know how to apply it to the world outside the church property. With these attributes in mind, Cliftondale UMC works to intertwine its members with social justice. They are working to address issues such as domestic violence, food insecurity, and racism, and are remaining aware of local politics.

The church building has housed political forums on behalf of the City of South Fulton. Within the walls, politicians have declare their candidacy, and individuals across the city have voiced their goals and concerns.

“We have to be better at partnering in ministry,” Murriel explains. It’s these kinds of partnerships that form trust between the community and the church.
By being socially conscious, Cliftondale UMC has enabled itself to become a pillar of support for College Park, even for those who have not attended a church service.

“Today, churches and denominations have to think of church in a different way,” he continues. “Churches willing to embrace new ideas in the same spirit will thrive.”

Murriel agrees with the words sometimes attributed to John Wesley: “Light yourself on fire with passion and people will come from miles to watch you burn.”
News