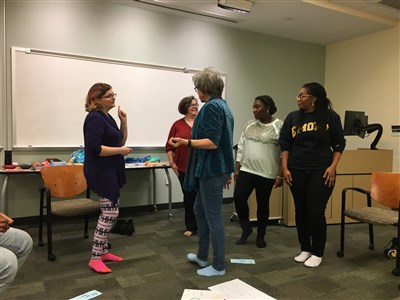 On a Tuesday evening at Candler School of Theology, students stroll into a classroom, slip off their shoes, and push the tables against the walls. They arrange chairs into a circle in the middle of the room. Props and books line a table at the front of the room.

This isn't a typical academic experience. This is Bibliodrama.

Taught by Barbara Hüfner-Kemper, Bibliodrama is a way to encounter and experience biblical texts.

"It is an interactive method of Bible study that includes creativity, body work, mindfulness, voice and role play," explains Kemper. "Bibliodrama explores and translates the scripture reading, transforming it into life and action. It's a playful and meaningful process, where the biblical story comes alive."

It's a process Kemper typically leads in a local church setting. A Bibliodrama experience can take as few as 6 hours or as long as a weekend or even a whole week.

This is the second term she has taught the class at Candler.

This semester, the class has worked on only one story, Matthew 25:14-30, The Parable of the Bags of Gold.

The students have found connections in their lives to the parable of the Bags of Gold.

One student, Joty Allison, has been surprised at his experience in the class.

"It isn't acting, it's real feelings," he said.

As the term nears the end, the students have taken time to talk, play, and think about a second biblical story to explore together for their final project. Each class includes time to work together and time to work alone.

Because the experience isn't used widely in the Christian church in the US, it took time for Kemper to find interest from students at Candler. She teaches the class only once per year.

Kemper is originally from Germany, and served as a missionary for 8 years in Brazil where she used and appreciated Bibliodrama.

The class recently had the opportunity to facilitate Bibliodrama for a pastoral counseling class at Candler. It’s an unusual setting, so some may have been out of their comfort zone, but the experience was profound for both classes. In their de-brief, the Bibliodrama class members reflected on how students were on the edge of their seats with expectation as the session was underway.

"Living in the presence of God is living vulnerably," said Kemper, quoting Walter Wink. "This was a difficult assignment and you did great," she told the class.

The class far exceeds what another student, Virginia Greer thought it would be. "It's creative, cathartic, therapeutic," she said.

"I should have given my insurance card over at the first of the semester because this has been therapy," joked Joty. "I'm thankful for this experience. If I were at another school I wouldn't be getting this."

Only one member of the class this term, La Donna Williams, is an actress. She leads a creative worship service at her church and has already put some of what she's learned into practice.

"I expected theater," said Kim Board, a third-year student. "But it's more about what we bring to it. You have to have courses like this in seminary."

Another student, Shari Ponder, clearly sees the practical application in ministry: "Biblical literacy, connecting across generations, a way to offer counseling, understanding the community you serve."

With this class nearing the end of the semester, Dr. Kemper already has 13 signed up for next year.

"It's not about performance, it's not to be perfect, it's a holy space," she said.

See a few photos from the Nov. 14 class session.