Bishop to Nominate Next Conference Chancellor 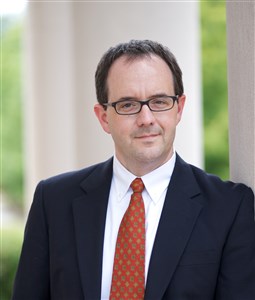 In June, Bishop Sue Haupert-Johnson will nominate Jim Thornton as our next North Georgia Conference chancellor.

“Over the years I have looked for opportunities to serve the church,” he said. “I look forward to this opportunity to serve using my legal experience.”

The role of chancellor is defined and required by the Book of Discipline. The chancellor is a legal adviser to the bishop and officers of the Annual Conference.

As Thornton takes on the role of Chancellor, Tom Cook, who has served for 22 years as North Georgia Conference Chancellor will take the position of Chancellor Emeritus. Cook is already working with Thornton to guide him into the role. 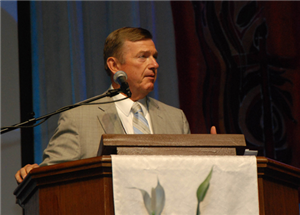 Cook (pictured at the podium at Annual Conference) has served the church under three bishops and worked with dozens of district superintendents.

“The work has increased over the years as more officers of the Annual Conference have recognized the need to consider legal issues day to day,” explained Cook. “We have perhaps become more responsible as an Annual Conference.”

The work varies from dealing with property issues, to drafting standing rules, to significant investigations to try to determine facts in disputes. Most importantly, sometimes the work is to simply be the face of the church.

“I learned a long time ago that I could sometimes cut off legal action against the church if I could listen and apologize when an apology was due,” said Cook.

He’s spent countless Saturday mornings and Sunday nights getting in the car with a District Superintendent and traveling to a meeting with church leaders on pressing matters.

“It’s a hands-on assistance for DSs and the officers of the Annual Conference,” he said. “It’s not a desk job.”

“The North Georgia Conference is by far my favorite client and the client I am most proud to have represented,” said Cook.

Cook has become a respected leader in the denomination, having trained judges who hear church trials, taught District Superintendent workshops on national and regional level, and he’s given many workshops for boards of trustees.He is a founding officer of the United Methodist Church’s Conference Chancellors organization.

“It’s been a real honor to serve,” said Cook. “I view it as a ministry. I view it as trying to make it easier for the work of the Annual Conference to proceed.”