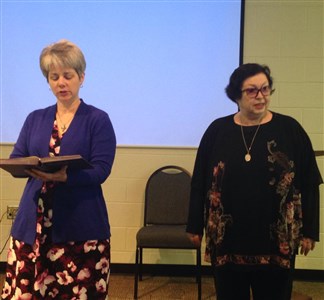 Rev. Larisa Parker of Faith UMC reads the words of "And Can It Be" and Rev. Ludmilla Garbuzove of Moscow First UMC
explains the tune she used to help better share the message in the Russian context. Photo: Rev. Scott Parrish

Ludmila was baptized at five years old in the Orthodox Church in Russia. She loves church music and is a trained singer and composer. Her first career was in music, but through the power of the Holy Spirit she met ministers in the United Methodist Church and became involved in the Methodist movement in Moscow. She was among those who helped establish First UMC Moscow in 1992.

She attended seminary at the Korean UMC seminary and became lay pastor of a group of “singing Christians”. In 1997 she was ordained as an elder in The United Methodist Church.

Today First UMC Moscow is an active congregation. Ludmila proudly shares that First UMC Moscow has some of the best church singers in the world. Their ministry is growing and they are introducing new people to Jesus Christ and helping them have better lives.

Ludmila has traveled to the United States a handful of times before and has a long-standing relationship with several United Methodist Churches in the southeast. Her church's connection to the North Georgia Annual Conference has grown with the establishment of a North Georgia Conference mission bridge to Russia.

Learn more about Bridges and the Bridge to Moscow at http://www.ngumc.org/Bridges.