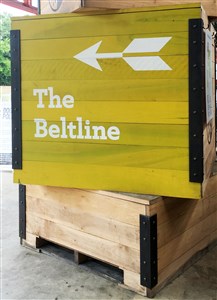 Evan McElreath works for the church, but is rarely in one when he is working. Instead, Evan’s ministry happens as he walks along the Atlanta Beltline, the city’s national model of urban development, that, starting with a bike and walking trail, is intended to circle the city and connect 45 neighborhoods along its 22-mile path.

Evan has been working primarily along the Eastside portion of the trail – the first to be developed, and has seen much success already in connecting with the many Atlantans that enjoy it every day.

Deeming himself a “church nerd,” Evan says he likes to discover what new and innovative ministries are out there. Currently working on his Masters of Divinity at the Candler School of Theology, he is also in a church planting cohort with a group out of Chicago. His current position as an unofficial “Community Chaplain” is funded by the North Georgia Conference, with staff and volunteer support from Grace, Inman Park and Neighborhood Church UMCs, all located along the Beltline’s Eastside Trail.

“My role is to figure out the Beltline and how it can work in the context of our nearby churches,” said Evan. “I am in a research-gathering phase, but I also find myself spontaneously ministering to people more often than I thought I would.”

Evan spends his days wandering the trail, talking to business owners and meeting people along the way. He often asks the question, “Why did the Beltline draw you?” He explains that he is searching for “spiritual dry spots” in this popular corridor, but his work is also strengthening the connectivity of the current congregations, helping their leadership think through how they can leverage the Beltline.

Grace, Inman Park and Neighborhood Church (a new church rooted in the merger of Druid Hills and Epworth UMCs) have historically worked together. All intown-Atlanta congregations, the churches collaborate on things like participation in the Pride Parade as well as Holy Week and other special services.

“While these three churches are offering an initial and tremendous base of support, our goal is to serve the people, not necessarily the churches,” explains Evan. “It’s really about establishing a UMC presence around the city where there is not one currently. ”

Next on Evan’s list is to explore the recently completed Westside Trail and collaborate with churches and communities along that portion of the Beltline. In the meantime, the Eastside churches are joining together for an Intown Easter Sunrise Service at the Old Fourth Ward multi-purpose recreational field. Bishop Sue Haupert-Johnson is this year’s featured speaker.

“Last year’s Easter Sunrise Service was not really promoted, and still had 200 people attend,” said Evan. “We have tremendous opportunity to connect with people that are searching for something.”

Evan says another hopeful outcome of this ministry will be to provide a unified voice for things like affordable housing, which is a big problem within the Beltline neighborhoods.

There’s no doubt the Beltline is a widely popular gathering place. And the North Georgia Conference has found just the right person in Evan to leverage it as an example of the church being boundless -- that it needn’t be within four walls.

“To me, the primary goal is to meet people where they are, and for most, that means they may not be ready to walk into a church,” he says. “My intent is to have meaningful conversations with people when they need it. This is the simplest form of sharing the love of Christ in a non-threatening way.”