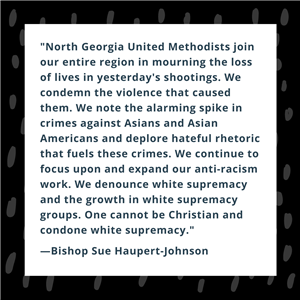 United Methodists across our connection condemn the violence that left 8 dead in metro Atlanta spa shootings this week. Seven women, six of whom were Asian, and one man were killed and at least one other was injured.

"North Georgia United Methodists join our entire region in mourning the loss of lives. We condemn the violence that caused them," said Bishop Sue Haupert-Johnson." We note the alarming spike in crimes against Asians and Asian Americans and deplore hateful rhetoric that fuels these crimes. We continue to focus upon and expand our anti-racism work. We denounce white supremacy and the growth in white supremacy groups. One cannot be Christian and condone white supremacy."

Many are underscoring that the horrific violence occurred amid a well-documented rise in harassment and attacks against people of Asian ancestry in the U.S.

Bishop Hee-Soo Jung of the Wisconsin Conference emphasized that the motive for the Atlanta killings is still under investigation. But he said Asian Americans have recently experienced “very targeted hatred” due to strains in U.S.-China relations and COVID-19 having first been reported in China.

“Fear is rising,” Jung, who was born in Korea, said by phone. “It’s not an easy time for racial ethnic communities. Our Christian community needs to work hard to educate for harmony and peaceful living together.”

Police arrested Robert Aaron Long, a 21-year-old white man, and said he admitted to the shootings. Authorities said the investigation continues into the reason for the killings.

Just a day before the Atlanta area killings, the Asian American Language Ministry Plan and the New Federation of Asian American United Methodists released a statement condemning the rise of anti-Asian violence in the U.S.

The statements referenced research by the Stop AAPI Hate reporting center. The center documented a sharp rise in verbal and physical attacks against Asian Americans over the last year, with women the victims in a large majority of cases.

News organizations such as PBS Newshour have recently reported that Asian Americans are forming their own patrols in Oakland, California, to help guarantee the safety of community members, particularly the elderly.

Jung and other United Methodist bishops of Asian background were among more than 40 signatories to the statement, which calls on the Council of Bishops to “create opportunities to listen to and hear from Asian Americans” about what they’ve experienced of late.

“As one of the signatories of the statement, I offer my own commitment to listening to those who are hurting and to joining with everyone who is seeking justice for all people,” New England Conference Bishop Sudarshana Devadhar said on March 17.

California-Pacific Conference Bishop Grant Hagiya also signed the statement. He said by phone that, whatever the motivation behind the Atlanta area killings, statistical and anecdotal evidence bears out a rise in anti-Asian acts.

“The uptick is just something we can’t ignore,” said Hagiya, a third-generation Japanese American. “We continue to monitor this and be very concerned about Asian Americans, Asians and Pacific Islanders.”

The United Methodist Commission on Religion and Race posted a statement on social media.

“Racism and violence against Asian Americans is a growing crisis,” the statement said.  “(The commission) stands with our Asian siblings facing anti-Asian racism and violence and we will continue to work to confront implicit biases and dismantle racism however we can.”

Dismantling racism is a priority of the North Georgia Conference cabinet and of the United Methodist denomination. Find resources at https://www.resourceumc.org/en/topics/diversity-and-inclusiveness.