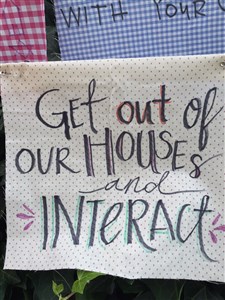 Revs. Anjie and Andy Woodworth were appointed in June to start a new church in the Candler Park neighborhood of Atlanta with the members of the merged Epworth UMC and Druid Hills UMC. The clergy couple in this unique appointment are finding their way using an age old method — getting to know the neighbors!

They have challenged themselves to meet 40 people each week. They keep a running list of names on their cell phones and compare and share notes as they go.

The goal is simply to have a relationship with other people in the area.

NOT A NEW CONCEPT

Anjie learned years ago from Retired Bishop Bev Jones to make herself a note about people she met, so the Woodworths do just that.

"When we cross paths with someone a second time, we can say 'Hi, we met on the playground,'" Anjie explained.

As Andy meets people he asks himself, What was God up to when he made this person?

Church planter Jim Griffith suggests putting pebbles or pennies in your pocket and moving them from one pocket to the other as you meet new people and not going home until you’ve moved every item to the second pocket.

While 40 people seemed like an intimidating number at first, they’re finding that they can meet the goal.

Some people they just meet organically, for instance waiting in line for coffee. Others they meet at community gatherings like a recent s'mores roast in the community garden.

On Halloween, rather than sending their kids to ring doorbells, the whole family walked to the front door.

The parent you met at your child's gymnastics class might live two blocks away, they said.

They're meeting people by getting plugged in with events put on by community organizations like the neighborhood Tour of Homes, and volunteering at the community garden and at the school. Actually, whenever there is a volunteer opportunity in the community they are sending a call out to all the church members and encouraging them to sign up.

They recently met a number of neighbors at the Candler Park Fall Festival. The church sits on a hill at the entrance to the large city park where the festival is held. They put out sidewalk chalk and bubbles, they had water bowls out for neighbors walking dogs, and they opened the church restrooms. They also offered a station for festival-goers to make prayer flags to hang in front of the church with their prayers, hopes, and dreams for the community.

They've asked church members and neighbors who they should know in the neighborhood, then they try to set up a meeting simply to get to know them better.

"I haven't had anyone say no yet," said Andy.

In the scheduled meetings, they try to get a perspective on the community. They're getting to know people like the president of the neighborhood association, the leader of the local park conservancy -- neighbors of varying backgrounds and religions with shared community values and goals.
These meetings are set without an agenda.

"If someone expresses interest in the church, we tell them about it," said Anjie.

This effort isn't just limited to the pastors. The work is being multiplied exponentially as church members get to know more neighbors.

One member, who wasn't sure just how to break the ice with nearby neighbors, had the idea to have a party for her house which will be 100 years old this year. She will invite the Woodworths to come to the party and share a house blessing.

The work could be intimidating, especially for an introvert, but both Anjie and Andy see great potential for this effort in an existing church. Anjie suggests meeting 10 people and setting up a one-on-one meeting each week -- or another number that makes sense for your church and context.

As the members and pastors work to start a new church, they're already seeing fruit from the connections they’ve made. In the church's first two preview services they had more than 100 adults and 25 kids.

When the new church hosted a pizza party in the neighborhood playground, they had 20 existing members arrive and 30 others from the community! Andy met one family while he was carrying the pizzas to the park!

"It will change the way you understand the world outside your church," said Anjie. "It's amazing what can happen!"