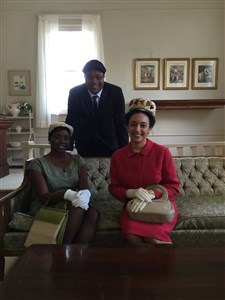 Collins Memorial UMC in Atlanta is known for community outreach and beautiful stained glass windows. Now it can add "filming location for an Oscar nominated movie" to that list!

The church's interior, exterior and grounds were used in the making of Hidden Figures, a movie telling the true story of Katherine Johnson, Dorothy Vaughan, and Mary Jackson—three African-American women working at NASA who served as the brains behind the launch of astronaut John Glenn into orbit. (If you've seen the movie, the picnic scenes, wedding scene, and church scenes were all filmed at Collins.)

Last year the church was contacted by Hollywood representatives who had scouted 30 locations. After much prayer, the congregation, led by Rev. Sheila Crowe, agreed to open Collins Memorial as a location to film.

Opening the church doors is nothing new to this congregation. Collins is a multi-ethnic church that has a passion to serve God by serving the community. The church offers large food distributions, community events, and concerts given by the Atlanta Musician's Orchestra among other activities.