Values at the Table: Common Table Meets to Begin Planning 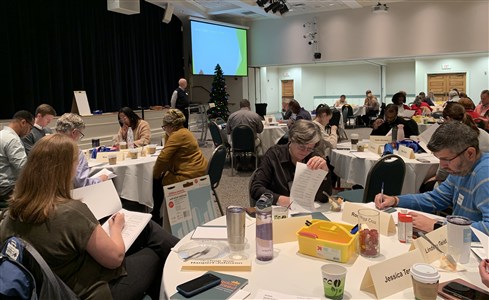 On Saturday, December 11, members of your Common Table committee (the 50 laity and clergy listed below) met at Dunwoody UMC for the first of a series of three planning meetings. (See photos from the day)

NGUMC Standing Rules outline the responsibility of your Common Table: “There shall be a Conference Common Table with responsibility to focus and guide the mission and ministry of The United Methodist Church within the boundaries of the North Georgia Annual Conference. It shall give leadership and guidance in setting the vision and priorities of the annual conference and in conducting an on-going process of refining and revising that vision.” Common Table membership includes the leadership of other NGUMC committees, boards, and commissions, along with our Bishop, our District Superintendents, and other members of the Extended Cabinet.

During their meeting on December 11, members focused on the question, “From a values perspective, who are we as North Georgia United Methodists? What are the values we embrace, or should embrace?” The 35 leaders in attendance engaged in thoughtful, sometimes tender, always energizing dialogue the surfaced a list of values they believe should guide not only the two remaining planning sessions but also all of our ministry and work across the Conference. 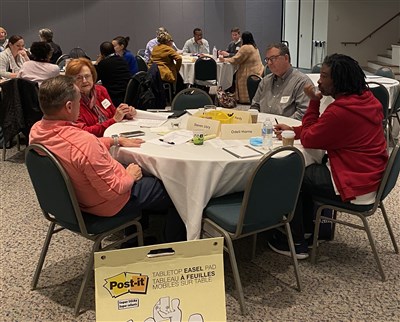 Key to the day’s work, facilitated by the Rev. Russ Moxley, was dialogue about “core values” versus “aspirational values.” Russ offered this definition of a core value to the group:

“A core value is something we:
Russ then led the group in dialogue about the difference between a “core value” and an “aspirational value.” In short, true core values are reflected in what we actually do, and how we go about doing what we actually do. Aspirational values are values we aspire to, but those values are not yet fully reflected in all that we do, and how we go about doing all that we do. We aspire to have all of our actions reflect those values, but we’re not there yet.

The members of the Common Table present on December 11 were divided into 7 small groups for much of the day’s work. They engaged the work both as small groups and together as a plenary, through conversation about perceived and experienced gaps between what we say our values are as the NGUMC, and what values are reflected in our actions. There was healthy disagreement at points, and there was energizing agreement at points.

As a final exercise for the day, each group was asked to write their list of what are or should be our North Georgia Conference values, naming which values on their lists were “core” and which were “aspirational.”

Here are the values listed by each group:


As you can see from the lists, there were some common themes that emerged; and there were some differences, too.  These common themes and differences were also clear during conversation about which of the values are “core,” and which are “aspirational.” Some members expressed the belief that all the listed values are aspirational. Others expressed the belief that while many of the values listed are aspirational, some are, in fact, core. Many agreed that while a number of the values are still aspirational, we are making progress in our movement from aspirational to core.
As the Common Table continues its work over the next, two sessions, this dialogue about “values” will continue. And it will also inform the ongoing work and decisions made by members of your Common Table. That Common Table members began their planning work with dedicated time focused on values speaks to how seriously every member is taking this work. And again: the dialogue begun December 11 will no doubt continue as the work of the Common Table continues.

On Saturday, February 26, the Common Table will meet again, this time at Columbia Drive UMC.  The focus for their second planning session will be on the communities we serve, and the needs of those communities. During that meeting, members of the Common Table will hear from guests who will be “painting a picture” of some of the most critical needs facing men, women, children, and families in the communities we serve as North Georgia United Methodists. It won’t, of course, be the entire picture. One day and one meeting is not nearly enough to do that. But the picture painted will include some of the most pressing needs; and that picture, along with the ongoing dialogue about values, will help shape the third planning session which will be held in March.

During the March session, Common Table members will engage in what will look and feel like more traditional organizational planning. They will do this with an aim to identify the key “areas of focus” for our Conference over the next 2-3 years. Those areas of focus will then help shape and drive our collective and connectional ministry and innovation across North Georgia.  For example, the areas of focus outlined by the Common Table through this planning process will be embraced by the members of your Barnes Evaluation and Administration Team (BEAT); and those areas of focus will be used as priority criteria in considering grant proposals and awarding grants. In other words, if a church, a group of churches, or any other NGUMC group submits a grant proposal aimed at addressing one of the areas of focus identified by the Common Table planning process, and can, in that proposal, demonstrate how the proposed initiative and ministry will help address one or more of those areas of focus, that grant proposal will receive priority consideration for being awarded a grant from the BEAT.

Below is a list of Common table members, along with each person’s role that, again, per our Standing Rules, means they also serve on the Common Table. For this year’s Common Table meetings, additional members were invited to widen the diversity of the Common Table.