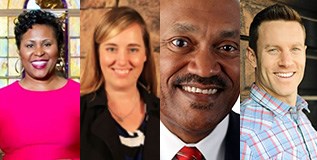 Bishop Sue Haupert-Johnson is pleased to announce that along with new projected clergy appointments, a new alignment of the ministry areas of the North Georgia Conference will be put into place in June.

Staff who were part of the offices of Congregational Development and Connectional Ministries will work together under a newly named "Center for Congregational Excellence."

"Over the years there has been a confluence of our work," said Rev. Dr. Phil Schroeder, who will serve as Director of Congregational Excellence. "To work together to develop new and existing congregations is part of what it means to be connectional."

Among the projected appointments for June of 2018, are new faces at the United Methodist Center who will be part of the Center for Congregational Excellence.

Rev. Yvette Massey and Rev. Blair Zant will both be appointed as Associate Directors of Congregational Excellence. Rev. Dr. Michael Stinson will step into the role of Associate Director of Congregational Excellence for Black Church Ministry. Rev. David Walters will join the staff as a consultant for New Church Development while continuing his current appointment at The Vine.

Additionally, Rev. Scott Parrish will come on board with the Conference staff full time as Associate Director of Congregational Excellence for Mission and Disaster Response.

Though it doesn't involve appointment changes, the Office of Ministerial Services and Spiritual Formation will operate under the umbrella of the "Center for Clergy Excellence." Rev. Dr. Dana Everhart will continue as director.

Rev. Jane Brooks, Executive Assistant to the Bishop, will add the title of Director of Connectional Ministries to her current role.

“Jane Brooks will continue to work with me on alignment and focus in Connectional Ministries,” said Bishop Sue Haupert-Johnson. “Phil Schroeder will be deploying the other clergy in his area to work directly with churches and districts to foster congregational excellence. Michael Stinson will also guide our efforts as we seek to be a more diverse and multicultural church. And Scott Parrish will use his gifts to make our mission efforts more aligned and connectional.”

These changes are within the bounds of the current budget, meaning it is budget neutral, and all the current staff functions, though organized differently, are still in place.


Get To Know the New Staff


Yvette Massey
Rev. Yvette D. Massey will begin her work as Associate Director of Congregational Excellence in June, but this role has long been building for her. She has a passion for the people of God, and her mission is "To Reach the Outcast for Christ." She believes that parish ministry and community ministry go hand in hand.

Rev. Massey earned a Bachelor of Science in Nursing from Clemson University and began her ministry as a registered nurse. However, she soon sought to minister in a more holistic manner, so she entered the Morehouse School of Religion at ITC in Atlanta. In June of 2005, she was ordained an elder in full connection in the North Georgia Annual Conference.

"I am excited about this new journey and thankful for the opportunity to serve in this capacity," she said of her new role. "I look forward to resourcing and further equipping pastors, laity and the conference in the area of church excellence."

Blair Zant
This June, Rev. Blair Boyd Zant begins her work as an Associate Director with the Office of Congregational Excellence. In this role, she looks forward to coming alongside colleagues and congregations to encourage them in living faithfully for Jesus, and resource them for creative, innovative ministry in Christ's name.

Rev. Zant graduated from the Westminster Schools in Atlanta, and holds a Bachelor of Science in Psychology with a minor in Music Therapy from the University of Georgia, and a Master of Divinity from Duke Divinity School. Blair is a wife, preacher, and a proud mother to two brilliant girls.

Zant began her appointed ministry as the pastor-in-charge of Sardis UMC in Atlanta, 2009-2011. She then served as the Associate Pastor for Sandy Springs UMC from 2010-2012. In 2013, she and her husband, Rev. Will Zant, were appointed as the Co-Senior Pastors of Cannon UMC, Snellville, where they led, worshipped, and served side-by-side for five years.

"I am incredibly grateful," said Rev. Zant. "I have been the beneficiary of creative, out-of-the-box appointments made in faith by Christian leaders and Churches willing to risk trying something new. In those appointments, I have witnessed God grab a hold of a person, or an entire community, and transform lives into the likeness of Christ. Sometimes it took moments. Sometimes months. Because of this, I am well acquainted with the fear of the unknown, and the reality of feeling ill-equipped for the task ahead. This is good news. Nothing has better prepared me to be used for Christ's ministry then to be humbled by my initial inadequacy. I was then motivated to listen, to learn, to ask for help, and to just try something. Anything. And then tweak what didn't work and try again."

Michael Stinson
Rev. Dr. Michael D. Stinson will serve as Associate Director of Congregational Excellence with a focus on Black Church Excellence and diversity education across the Conference.

"I am excited about the opportunity to serve in the newly developed Center for Congregational Excellence," he said. "I especially look forward to traveling North Georgia getting to know our churches. Our connectional nature affords us unique ways to work together in Kingdom Building!"

Rev. Dr. Stinson is a native Atlantan and life-long United Methodist, having grown up in Warren Memorial UMC where he was baptized by his grandfather, Rev. Charles S. Stinson, Sr., the senior pastor at that time.

In 2000, he started a new career path in the field of engineering. He was employed at the Georgia Department of Transportation for seven years. During that time he participated in Disciple Bible Study that put him on another career path. Obedient to the Spirit he entered Gammon Theological Seminary at ITC and graduated in 2006 with the highest honor as valedictorian.

Rev. Dr. Stinson was ordained and an elder in full connection in the North Georgia Conference in 2010.

He has served appointments as senior pastor of Poplar Springs UMC, senior associate of Ben Hill UMC, and since 2012 Dr. Stinson has served as senior pastor of Bethel UMC in Atlanta. Under his leadership, this church has taken mission trips to Staten Island; Sandyhook; Haiti; Kenya; Aurora, NC; Sulfur, West Virginia; the Dominican Republic, and Baton Rouge.

Stinson serves on Conference committees for Georgia’s Pastors’ School (vice-chair), the East Africa Bridge, and Black Congregational Development. Previously he served on the Resolutions Committee and Higher Education and Campus Ministry and the Wesley Foundation of GSU. He is married to the former Patricia Neal-Tyler and is the proud stepfather of Syntara Tyler.

Rev. Dr. Stinson has dedicated his life to Christ to be used however, whenever, and wherever God so desires.

David Walters
Rev. David Walters will join the Conference staff as a consultant in the area of New Church Development while he continues his role as Lead Pastor at The Vine UMC.

Rev. Walters became a follower of Jesus at an early age and was called into ministry at the age of 18. Almost immediately, God gave David an opportunity to live out this calling as a youth pastor. After serving as a youth pastor for 7 years, he was commissioned by The United Methodist Church and appointed to Snellville UMC as an Associated Pastor in 2002. He was ordained in 2005.  In June of 2006, he started a new church - The Vine Church in Braselton. Rev. Walters’ passion is “connecting with people and connecting people with God.”

Walters' take on church planting is that while it's challenging and intimidating, it's completely fulfilling. After all, "Faith expects from God what is beyond all expectation. -Andrew Murray”

He and his wife Elizabeth have four children.
"I’m so grateful for the work of The Office of Church Development over my 23 years of local church ministry in the North Georgia Conference, especially my season as a church planter," said Walters. "Establishing and growing The Vine Church would not be possible without the initial and ongoing support and encouragement of Church Development. It has been my pleasure and will be my pleasure to support and encourage other pastors, church planters, and churches as they prayerfully discern, strategically plan, and begin new churches and campuses."
News