Dances with the Stars: Clergy Edition Embraces the Unexpected 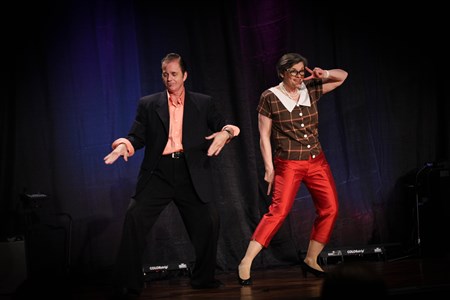 Editor's Note: We received an update March 18 on the People's Choice Award. "Because of the tremendous effort of the LaGrange District on behalf of Denise Wilson, we decided to audit the votes and have discovered that the difference between Denise Wilson and Alice Rogers was fewer than 50 votes.  Therefore we have decided that this year the People's Choice Award is a tie and Alice and Denise will share the award." 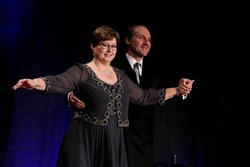 It seems apparent after the Matthew Initiative’s third year of hosting the fundraiser, Dances with the Stars: Clergy Edition that the ministry will continue to raise the bar higher and higher on behalf of its mission to bring more children into church.

This year, the competition was hosted by Impact Church, who arranged the room to include a large open space in front of the stage. During intermission and after the show the audience was invited to get up and dance to a broad range of tunes. The dance instructors even joined the crowd for some fun.

Rev. Robin Payne of Conyers First UMC started the night off successfully, receiving 8’s across the board from judges Rev. Dr. Phil Shroeder, Rev. Dr. Bernice Kirkland, and Bevin Newton. While speaking with host (and former contestant) Rev. Michelle Rawdin, Payne shared that she had even put off knee surgery so that she could dance for the Matthew Initiative. She would later be told that she came in at a close second for the Bird of Courage Award. 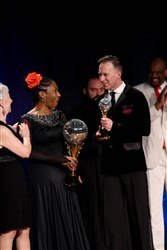 Next, Denise Wilson, administrative assistant for the LaGrange District, put on her cowboy boots and twirled around the stage before receiving high scores and sharing her love for supporting a good cause and indulging in some friendly competition.

Rev. Brian Tillman of Johns Creek UMC performed an impressive salsa in his seersucker suit, putting all of the judges in agreement that “he looked cool up there.”

After intermission, things truly took a turn for the unexpected. As Rev. Katy Hinman of Decatur First UMC took the stage in Jedi attire, co-host Rev. Mathew Nelson pointed out that her assigned dance partner was watching from the back of the room. Meanwhile, a mysterious dark figure joined Hinman on stage and the two began to dance and duel. At the end, the man revealed himself to be Hinman’s husband Jonathan Brown.

Next Tonya Murphy took the stage and performed the tango so well that she received the Judges’ Choice Award, and took home a giant mirror ball trophy. Murphy wears many hats on behalf of The United Methodist Women, as a national board member and as a former UMW conference president. She is also celebrating five years of being cancer free. 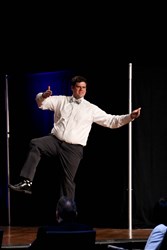 Rev. Thomas Martin of Sandy Springs UMC took the stage alone, telling host Nelson that his partner had become ill, but he was going to perform their routine anyway. His bravery and enthusiasm earned him a perfect score and the Bird of Courage award.

Despite the tough competition that came before her, Rev. Dr. Alice Rogers of Glenn Memorial UMC, wowed the audience, many of whom came from her church’s congregation and youth group, with her upbeat dance number. Before the ministry’s final testimony of the night, Rogers and Wilson were neck and neck for the People’s Choice Award. After a final audit of the numbers, fewer than 50 votes separated the two so they were boy named People's Choice Winners in the week following the competition. (Updated March 18.)

Throughout the night, several church leaders, from both North Georgia and surrounding conferences, shared their positive experiences partnering with the Matthew Initiative, encouraging others to join in the efforts to make church more welcoming to children.

The event’s official total in donations, from paid votes to ticket and dinner sales, landed over $30,000.

Next year will certainly exceed expectations, once again! Follow the Dances with the Stars: Clergy Edition Facebook page to stay up to date.

View photos from the big night