Whether they’ve rearranged their current space or found new places and methods of worship, several of our North Georgia United Methodist churches have decided to look at worship in a new light. 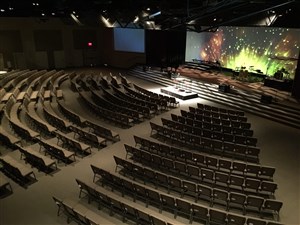 Sugarloaf UMC is one of several North Georgia United Methodist churches that use environmental projections. These projections are interchangeable to best fit the service at hand, and are displayed across the sanctuary wall.

The church’s pastor, Rev. Matthew Mitchell, has been at Sugarloaf UMC about 3 years ago. He said the church decided to upgrade their interior to better tend to their community. During a time where several churches were closing and struggling around them, he said they “wanted the community to know that we are still here.”

They turned to Canton First UMC, who had begun projecting graphics and interchangeable lighting across the entirety of the wall behind their pulpit. Canton staff helped them determine the type of environments they wanted to set.

Being a young church with little historical background has allowed Sugarloaf UMC to embrace the modernity that the large projector screen and colored lights provides, but also allows them the ability to easily transform their space to fit the depth and emotions of each sermon.

Sugarloaf’s environmental projections can include motion graphics, photographs, and logos.

Mitchel credits their large number of comprehensive volunteers and worship team for successfully adapting the space for each service. They do everything from planning out graphics and lighting weeks in advance, to analyzing each sermon to best complement its message across the walls.

Environmental projections work perfectly with the space and people of Sugarloaf UMC, but Mitchell recommends taking time to intensely evaluate whether this is the best alteration for your church before committing to the project. The upkeep requires many skillful and responsible volunteers, and its contemporary vibe may not be well received by all congregations.

“Be authentic to the community and church that you serve,” Mitchell advises.

Other local UMCs using these projections include Canton UMC and Sugar Hill UMC.

City On A Hill

City On A Hill UMC in Woodstock offers a Saturday evening service at 5:14 pm, in honor of Matthew 5:14, called The Gathering. It is dimly lit with small tables set up all around the room, like a coffee shop. A plus side, all of the coffee, cappuccinos and all, are free!

The church decided to add on Saturday service due to their overflowing Sunday services. They originally made it more upbeat than the others, with a rock concert style, but once the growth of the service became stagnant, they decided to experiment with the atmosphere.

The toned-down, but still modern, coffee house style brought in 20 percent more worshipers on Saturday evenings. Leaders figured the style of worship would attract mostly the local college population, but the acoustic music and table side coffee baristas brought in everyone from teens to members in their 60s.

Worship and Communications Director, Allen McMullen believes a church can successfully step outside the box once they accept that having a variety of styles is a great benefit.

“You can stick to the plan,” he says, “but also be open to changes.”

He also commends the talent of the volunteer baristas and the quality of their seasonal coffee products for maintaining the warm atmosphere.

They rarely have the exact same band play on Saturdays consecutively, and pastors alternate preaching the messages. Worshipers never completely know what they are going to get until the service starts.

The lead pastor of City On A Hill UMC is Chris Bryant. 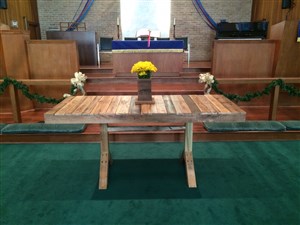 The goal of North Decatur UMC’s newest service, The Table, is to combine ancient practices with modern worship, but originally it was added to the church’s schedule to solve a common Sunday service problem.

“We just were running out of room!” Lead pastor Rev. Dalton Rushing explains, “but as we asked around within the congregation and among people in the community, we realized there was a desire to do something different, especially something that felt experimental.”

They decided to use the service as a chance for improvisation, while keeping the traditional pieces that the community most enjoys, like communion.

Each service ends with holy communion, served on a hand crafted table placed at the front of the sanctuary.

“While we knew we wanted to include more modern music and visuals, we did not originally set out to have The Table be a Communion service,” Dalton say. “But the more we talked about the things that ground us as a community of faith--and as United Methodists--we realized how important it would be to build each service towards gathering at the Lord's Table.”

“We also realized that one of the core United Methodist teachings--the open table--mirrored who we hope and profess to be: a community where all people are invited to experience the grace of Jesus Christ.”

The 9 a.m. service is also kid friendly and inclusive. People of all ages are encouraged to join together in worship at The Table at North Decatur UMC.

Chapel Roswell is a contemporary service offered in the Roswell UMC historic chapel. Once known as Roswell X, the space received the finishing touches on its rebranding and reconstruction in September 2015.

The service, lead by Rev. Eric Lee, is now set up “in the round,” with a hexagon-shaped platform in the center of the room, and multiple screens set up along the outside of the pews.

While the renovations are considered modern it still compliments the historic interior setup and stained glass. 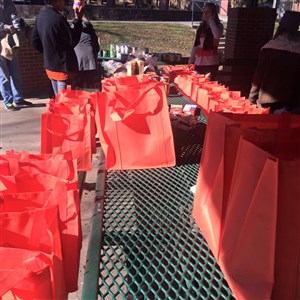 “The Nett in Gwinnett [County] is a place where we don’t get to pick and choose what kind of fish we get,” is how Rev. Rodrigo Cruz and wife Kelly Ann describe their congregation. “... everyone can be caught by God's grace!!”

The Nett, however, has not merely invited others to their worship services, they have done their “fishing” within the community.

In their beginning stages, The Nett wanted to more actively invite their community to worship in their rented space at Parkview High School, so twice a month they replaced worship with Missional Sundays.  Missional Sunday activities included hosting worship in Gwinnett County hospitals, making “teacher survival kits”, constructing meals in Lilburn City Park for local families in need, and much more.

Now, the church meets in the school every Sunday for worship, but still host an occasional Missional Sunday within their space.