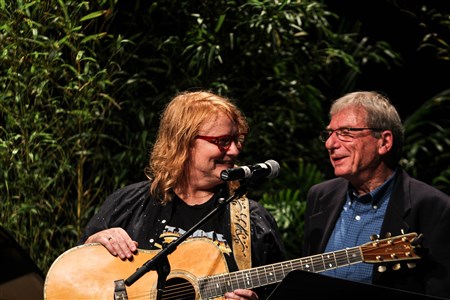 Two notable Georgia Methodists were invited to speak and perform in Portland, Oregon, for the General Board of Church and Society’s annual General Conference dinner. Though Church and Society usually hosts a more formal, sit-down dinner, this year it was a laid back event with a high profile guest - Emily Saliers of the Indigo Girls duo. She brought with her her dad, Dr. Don Saliers, a former professor at Candler School of Theology and current Emory Theologian in Residence.

The two sang several Indigo Girls songs and a few hymns. As they explained, Don Saliers brings the Sunday morning sound, and Emily brings the sounds of Saturday night.

“Even though we play in bars,” said Emily of her life as an Indigo Girl, performing is "still a spiritual experience.”

As fans and social justice supporters listened to the original songs, one audience member said the music does have spiritual undertones that provide “a voice for the groaning of the earth.”

When father and daughter put their sounds together, they have a lot to say, and they said it poetically through song.

“For every great political movement, there is a song,” said Emily, who sang and played guitar during the dinner while her father sang accompaniment and played piano.

“Where there is a song and a hunger, God is paving the way,” Don added.

The two shared stories of social injustice that they have witnessed, both locally and globally. They explained the importance of listening to one another and building connections with those who are different.

“The world is too broken for us not to listen and not to love one another,” Don insisted.

Emily emphasized the importance of listening and practicing patience between generations.

To close the evening, the audience stood and sang “Let Us Break Bread Together.”

Don and Emily Saliers were invited to participate in the Church and Society gathering by Susan Henry Crowe, who worked with Don Emory University for about 20 years.

Don is a member of “New Church Atlanta” (a new congregation formed by the recent merger of Druid Hills UMC and Epworth UMC) and is currently assisting in worship planning for the 2016 North Georgia Annual Conference.