Hope and Help: ERTs from North Georgia Serve in Louisiana 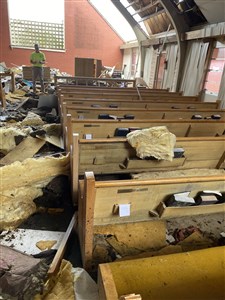 With a goal to bring hope and help to our neighbors, they found the people of Louisiana themselves to be a beacon of hope. 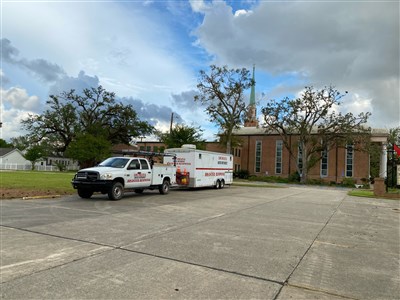 "Our team was deeply affected by the amount of destruction we saw," said team lead Mike Derrick. "The sea of blue tarps on all the houses was overwhelming and everywhere you looked you saw more homes that needed tarping and trees that needed to be removed."

The damage is widespread in Houma and many necessities such as gas are in short supply. The North Georgia teams made quick friends with the Louisiana Annual Conference's District Disaster Response Coordinator, Delvin, who kept spirits high with stories and laughter.

"At our first job site we met a couple who were just returning from working a long night shift at the hospital," said Mike. "Both the wife and the husband looked like they were reaching deep inside for the last bit of strength just to get home and get some rest. As we talked with them about what our team was going to do to clear the trees off their home and their neighbor's homes, tears came into the eyes of the wife.

"We ran into the same types of reactions several places where we worked last week," he said.

The teams found the people of Houma to be welcoming hard-working people who have been received a major punch.

"They need our conference’s help to regain their footing and begin to get their lives back into order. They need ERT teams. They need a lot of teams," said Mike.

On to Golden Meadow

While some of the team continued serving in Houma, some were asked to journey further into the devastation to serve Golden Meadow United Methodist Church.

Upon arrival, the Louisiana Conference Disaster Response Coordinator, Bob Deich, gathered our ERTs and church members to deliver a message. He spoke of the memories the building represented – marriages, baptisms, funerals – happy times, sorrowful times, and times when people just needed to feel the presence of the Holy Spirit. Several church members shared personal experiences from more than 50 years of worship and fellowship. Tears were shed.

"While participating in this service, I could not help but reflect, what if this were my church, what would we do, how would we respond, how would I respond?" said team lead Clyde Almy. 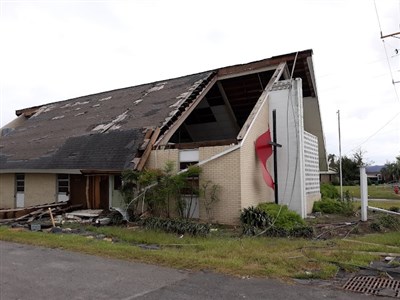 "We were greeted by the church's new pastor of two months and a few congregants," shared team member Mark Brown. "We surveyed the situation and have to admit I am haunted by the mental images. The sanctuary was damaged beyond repair. Windows were blown out, part of the roof ripped off, several inches of water and muck covering the floors. Our established goal for that part of the building was to save the pews. The team worked tirelessly and cohesively achieving the ultimate goal of removing and storing the pews in a sheltered area."

"The team removed the blocks, emptied the room, and tarped the roof. It gave me a new appreciation for how hot a tin roof can be!" said Mark. "The most impactful discovery in that part of the building was 6 photo albums, buried under rubble but in fair condition, containing pictures of children, families, and special church events. Their plan is to restore that building and utilize as a temporary sanctuary."

The Church is Not a Building, It's the People

Again, it wasn't the buildings that made the biggest impact on our ERTs – it was the people.

"They are a resilient community. While we served them – they loved us" said Mark. "We stayed in the parsonage, which had electricity restored only two days prior to our arrival. More importantly, they provided us enough great food to feed an army – all delicious!"

After the work was complete, and before the packing began, the teams had an impromptu service.

"A congregant, Jim, had prayed saying that 'God we have been dealt a death blow.' Upon seeing the quick transformation of the property he said hope returned. The final night he prayed, 'God we are redeemed,'" shared Mark.

A church leader with tears in his eyes showed their plans to rebuild.

"Proudly, he explained how the pews would be reconditioned and placed in the new building. Yes, it will be smaller to start, but I am convinced it will grow to new heights," said Clyde. "For you see, Golden Meadow knows a church is not a building, it is the people."

To learn more about serving as part of an ERT team, please contact Rev. Scott Parrish at scott.parrish@ngumc.net or Rev. Thom Shores at thom.shores@ngumc.net.