Faith is Touchstone for Part-Time Politicians 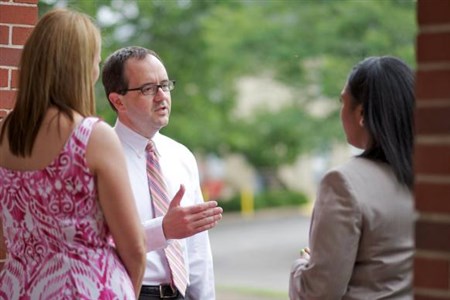 Jim Thornton has been attending LaGrange First United Methodist Church his whole life, and now serves as the small city’s mayor on a part-time basis. Photo by Ashley Blencoe.

In LaGrange, Georgia, public housing has long been kept on the wrong side of the tracks.

Jim Thornton, mayor of the community of 30,000, means to change that.

“What we’re finding is that by historically concentrating poverty in certain sections of town, families and children suffer,” said Thornton, who has a law practice in LaGrange. “We are actively trying to unwind that policy.”

As mayor, Thornton works with people of all faiths and no faith, and has appreciated the welcome he’s received in a range of local churches. But he doesn’t mind drawing a dotted line between his own denomination and public service.

“Our denomination has been a leader in going outside the four walls of the church and trying to address community concerns,” he said. “I think that goes back to the time of John Wesley and some of his work, particularly with the poor.”

But across the country, many more United Methodists like Thornton serve part time in local or state political offices, drawing on their faith as a resource.

They’re often balancing careers as well as deep involvement in their church. But they report finding challenge and satisfaction in public life.

“It’s like church work,” said Lee Denney, a state representative in Oklahoma. “It’s an opportunity to give back.”

Denney, 62, once described herself in an essay as “Methodist to the bone” and grew up attending First United Methodist Church in Cushing, Oklahoma. She has been singing in the chancel choir there since age 14, and as an adult she’s served on a range of church committees and gone on mission trips.

By profession, she’s a veterinarian. She’s also a mother of two grown children.

Eleven years ago, her family and work responsibilities parted enough for her to follow her dream of running for the state legislature. She didn’t have any divine message to do that, but she doesn’t believe the circumstances that led to her election were altogether accidental.

“I feel like God did have a hand in working that perfect scenario,” she said.

Denney, now president pro tempore of the Oklahoma House of Representatives, has worked on a range of issues, including getting DNA samples on arrest (to help solve crimes and bring victims and their families resolution), promoting animal welfare and boosting public education.

At the request of Bishop Robert E. Hayes Jr. of the Oklahoma Conference, she worked with hog farmers to minimize the problems their facilities were causing for Canyon Camp, a United Methodist facility.

Working things out and cutting red tape are tasks she enjoys.

“I’ve been able to help normal citizens that don’t know which way to turn to access state government to get the help they need,” Denney said. “That’s been the best part of this job for me.”

It’s not uncommon for United Methodist public officials to cite their faith as guiding them on a particular issue.

“I vote against that every time, but we still have it,” said Timbes, a retired math teacher and past president of United Methodist Women at First United Methodist Church in Conway. “That’s a position I won’t change on.”

For Dwight Boykins, council member in Houston and a longtime member of Windsor Village United Methodist Church there, working for job programs for hard-to-employ people and free housing repairs for needy seniors have been causes close to his heart.

In 2014, Boykins voted against the Houston Equal Rights Ordinance, a broad anti-discrimination measure. It passed the city council but was recently rejected by Houston voters, after opponents alleged that it would allow men dressed as women to enter women’s restrooms.

Boykin’s vote put him at odds with some who had backed him, but he said he was reflecting the will of most of his constituents, as well as his own understanding of Scripture.

“I will be an outcast if it comes to jeopardizing my Biblical beliefs,” he said.

But, as has been demonstrated often, The United Methodist Church is a big tent, with people drawing on their faith yet coming to different conclusions.

Kathy Webb, a longtime member of First United Methodist Church in Little Rock, Arkansas, and a “preacher’s kid,” successfully sponsored an anti-discrimination ordinance as Ward 3 representative to the Little Rock Board. Earlier she served in the Arkansas legislature, and was its first openly gay member and the first woman to co-chair its Joint Budget Committee.

Webb is happily aligned with The United Methodist Church on most of its Social Principles, but strongly opposes church law declaring the practice of homosexuality to be “incompatible with Christian teaching.”

“I’m a child of God and made the way I’m made,” Webb said. “Being a lesbian is part of who I am, and if anything has made me more able to see the suffering and pain of others.”

Webb plans to stay in the denomination and work for change, as she has in government. She believes that’s an act of faithfulness.

“My parents had a plaque in their bathroom that says, `What you are is your gift from God. What you become is your gift to God,’ ” Webb said. “While I, like everyone, fall short on a regular basis, I try to keep those words in mind.”

Local governments vary widely on whether they begin public sessions with prayer or meditation, and that goes for those led by United Methodists.

But private prayer for guidance, especially in regard to temperament, seems close to universal among those in the denomination serving in public life.

“Before the meeting I’m sitting in my chair there at the council desk, and I just close my eyes and say a short prayer –  `Please help me get through this, Lord, and get the right answers,” said Dave Bishop, mayor of Jesup, Iowa and a choir member and trustee in the town’s First United Methodist Church.

Bishop also wears a ring with an engraved cross that his wife, Denise, bought him. That’s proved helpful when the stress level gets high at council meetings.

“I look down at that and keep on going,” said Bishop.

Public life is, well, public – and that means United Methodist office holders can get cornered at church by someone who wants to talk politics.

“I would say that it’s not frequent, but it does happen that people will stop me and make some comment about some initiative or request. But I have not found it to be inappropriate,” said Thornton, the LaGrange mayor.

Denney, the Oklahoma legislator, said it happens to her too.

But given her profession, she more often has legislator colleagues seeking her out for reasons other than state business.

“I get a lot of veterinary questions,” Denney said.