Faith, Race and Community: A Tale of Two Congregations 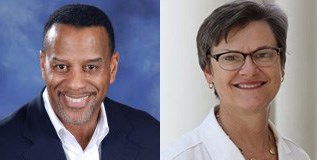 In 1963, Martin Luther King, Jr. spoke these words that still ring true today. While there are certainly more racially diverse congregations than there were 50 years ago, community population trends and worship traditions tend to create churches that are predominantly one race or another. In a political and social climate that feels increasingly divided and divisive, how do United Methodist Churches come together and bridge gaps in understanding? As united people of faith, how do we reconcile our history and the role the Church has played in institutionalizing racism? These questions recently inspired two churches to begin a partnership to have difficult conversations about race and faith.

Glenn Memorial UMC, a predominantly white congregation, and Ben Hill UMC, a predominantly black church, are two of the largest churches in the conference. Around a year and a half ago, the senior pastors attended a two-day workshop on race and diversity put on by the Timothy Initiative. The guest facilitator, Al Vivian, raised some tough questions and led pastors to confront their own racial biases. It was especially transformational for Glenn’s Senior Pastor, Rev. Dr. Alice Rogers. “Her heart was pierced,” says Ben Hill Senior Pastor, Rev. Dr. Byron Thomas. The two spoke about the idea of their two churches coming together to discuss race. Rogers’ sincerity was meaningful to Thomas who would need to gain the support of his congregation who had participated in similar efforts before only to have them fizzle out and not lead to substantive change.

Meanwhile, Carol Allums, a lay leader at Glenn, also felt called to lead the church toward a deeper discussion about race and white privilege. The three came together to devise a plan. Guided by John Wesley’s philosophy of “do no harm,” the idea was to have a series of conversations with approximately 20 people from each congregation in various locations throughout the city. Jim Wallis’s book, America's Original Sin: Racism, White Privilege, and the Bridge to a New America, would help to guide and inform the conversation. Importantly, there was no set end-date. The idea was to let it take shape organically with the intent of it growing into a long-term relationship and initiative for both churches.

In the months since, the churches have had three joint conversations held at Candler School of Theology, Grace UMC, and Clark Atlanta University – and feedback from both congregations has been positive.

“What’s been most surprising is the differences in our lived experiences,” says Rogers. She cites, for example, her happy childhood memories of getting dressed up and going to shop at Rich’s in downtown Atlanta. It was not a happy memory for others in the group who remembered being forced to shop only in the basement and not being able to use the restrooms or dine in the restaurants.

For Allums, the stories of the heart-breaking conversations that African American parents have with their children about how to stay safe in the world were particularly powerful. For the Ben Hill members who attended, it was encouraging to other brothers and sisters in faith to simply listen.

The two congregations are looking at new ways to keep the conversation going -- including putting together small groups of members of each congregation who simply come together for dinner on a regular basis. They are also planning joint trips to museums, Civil Rights sites and even to see the film “Black Panther” as a group and discuss.

For those who fear that talking about race is too political, Dr. Thomas offers that it’s really a spiritual issue. “We have to give it a spiritual framework and examine how it fits with our baptismal vows and liturgy,” he says.

“This isn’t just about making ourselves feel better,” says Rogers. “We have to go into these discussions from a position of our faith.” While the conversation can be difficult and at times uncomfortable, both congregations see their shared faith in Christ as the bond that draws them even closer.

Rachel Quarterone is a freelance writer and historian (and United Methodist) in Atlanta.