Focus Area: Racial Justice and Healing is the Pathway to Beloved Community 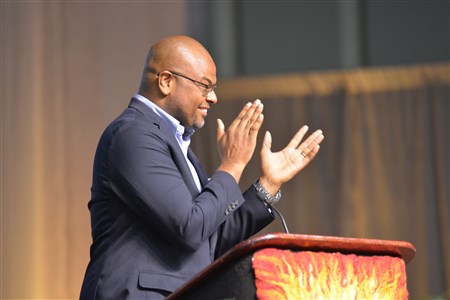 I was in the National Center for Civil and Human Rights in Atlanta one day. In the bottom level the King papers are held on a rotating display. On this occasion there was a pamphlet that Dr. King contributed to. He wrote about the aims of his resistance efforts and the strategy behind them. In it, he wrote something like, “We aim to resist in such a way that when we are victorious, those who have opposed us will be able to celebrate with us.”

This statement has stuck with me and informs this area of focus.

When combatting racism, justice is A goal but it is not THE goal. It’s penultimate. The ultimate goal for anti-racism for the Christian must be community. This is why Dr. King taught about the Beloved Community. The beloved community does not allow injustice to remain. It pursues justice to correct the wrongs and also seeks to heal the wounds caused by the injustice. When community is the goal, the means used to achieve justice matter. The methods used must not prevent healing from being possible. This is why this focus area is called Racial Justice and Healing. Racial Justice and Healing is the pathway to Beloved Community.

Racial justice and healing should be a focus at every church. There are many churches in our conference who engage in this work in thoughtful and meaningful ways.

Examples of the possibilities in this area are churches like Central UMC in Atlanta. With a grant from the Barnes Fund, the Rev. Angie Johnson, began a 5-month project called Humanity in Action that partners young adults in the community with recruits from the Atlanta Police Academy in a new program that creates space for the young adults and Police Academy recruits to see the humanity in each other. By building meaningful relationships, members of each group will see beyond the polarizing stereotypes that divide, and begin to dismantle the “us vs. them” narrative.

It includes the work of Native American Ministries headed up by Rev. Dr. Beckie Jones as they work to have all first native tribes in Georgia, and namely the Georgia Tribe of the Eastern Cherokee, to be recognized by the state and the federal government. The North Georgia Annual Conference adopted a resolution they brought forward in June.

It includes the work of Hispanic Ministries and Rev. Juan Quintanilla who have been leading education efforts about immigration and advocacy for immigration reform.

Another example is the ministry being done in Athens at Oconee Street UMC. After many months of discernment and spiritual focus on racism and white supremacy, Oconee Street UMC began pursuing the work of reparations alongside the Linnentown Project. In partnership with the Athens community, Ebenezer West Baptist Church, and the Linnentown Project, they have formed the Athens Reparations Action and are currently working to raise the funds to repair some of the historic harm done to residents of that community through urban renewal. They continue to interrogate their own history as United Methodists in East Athens as they seek to address the ongoing impacts of white supremacy.

There are many others that engage in this work from churches like Impact UMC, Glenn Memorial UMC, and Neighborhood Church to groups like North Georgia BMCR and Glisson Camp and Retreat Ministries.

Finally, the Commission on Religion and Race has created a Racial Justice and Healing Academy that has just completed its pilot cohort that prepares lay and clergy from around the conference to engage in Racial Justice and Healing ministry. The participants in the pilot academy have engaged in a series of meaningful and intentional experiences that we hope will produce fruit in the Conference for years to come. Participants include lay, clergy, chairs of advocacy areas, conference staff, and others.

I know many people who see the hurt and pain of racism. I hear folks share that they want to do something but they don’t know what to do or where to start. If you are one of those folks and you are serious about wanting to make an impact, I encourage you to consider signing up for the next racial justice and healing academy.

The Fall Racial Justice and Healing Academy cohort will begin in August and run through February. It requires one lay person and one clergy person from the same church to apply to be in the academy together. If you feel God tugging on your heart for this ministry and want help to create this ministry at your church, we encourage you to learn more at ​https://www.ngumc.org/racial-justice-and-healing-academy.

There is a place for you at the table.

Rev. Brian Tillman is the North Georgia Conference Director of Inclusion and Advocacy. Contact him at brian.tillman@ngumc.net.