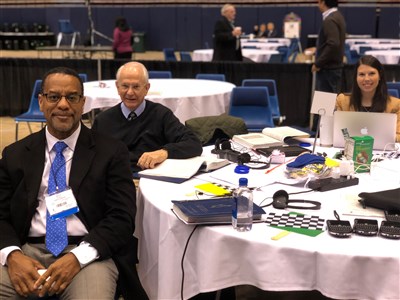 2/26/2019
"Gracious God we are your children standing in need of your wisdom and of a vision larger than ourselves. Pour your Holy Spirit upon us." - Bishop Sue praying at the Special General Conference

As United Methodists leave St. Louis and the 2019 Special General Conference, there is much we don't know. After a day of debate and discussion, the majority voted in favor of the Traditional Plan (438 to 384) in today's plenary session. However, a portion of the plan is known to be unconstitutional. The plan was referred to the Judicial Council for review.

The Judicial Council will address the request at its next scheduled meeting April 23-25.

The Rev. Gary Graves, secretary of General Conference, said any piece of legislation that the Judicial Council declares unconstitutional will not be included in the Book of Discipline.

Delegates voted to adopt the minority report for a petition on disaffiliation that they sent forward yesterday. That petition passed. It too will be reviewed by the Judicial Council.

The General Conference is the highest legislative body in the church and the only group who can decide church law and speak officially for the global denomination.

The 864 delegates (half lay, half clergy) from all over the world met from Feb. 24-26 to discuss and act on the report of the Commission on a Way Forward over the matter of human sexuality.

The work of General Conference resumed this morning with worship and ended this afternoon with song and prayer. North Georgia's own Rev. Nora Colmenares wrote this morning's worship liturgy.

Delegates collected a special offering for the United Methodist Committee on Relief.

"UMCOR has a history of being the first on the scene and the last to leave," said Bishop Thomas Bickerton. "The connectional relationship of the church, saving of lives and rebuilding hope all across the world, is our way to tangibly demonstrate that we are stronger together than we are apart. This is only possible by the coordinated connectional ministry of caring."

Pinson has been clear that his hope for the church is unity. Even as he was pained by some aspects of the conference, he shared this afternoon that, "The events of today caused me to realize that this movement of Methodist people cannot be abandoned."

North Georgia United Methodists are invited to District Gatherings in March for more information about this session.