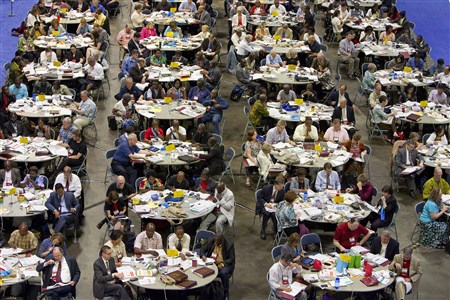 The Commission on the General Conference has just announced its decision to further postpone the 2020 General Conference until Aug. 29 – Sept. 6, 2022 in Minneapolis, as the COVID-19 pandemic continues to affect the safety of mass gatherings and travel.

In response to the further postponement, the Council of Bishops (COB) is calling a Special Session of the General Conference to be convened online on May 8, 2021. The purpose of the Special Session will be limited to gaining a quorum in order to suspend the rules for the sole purpose of allowing the use of paper ballots to act upon 12 pieces of legislation that would enable the church to effectively continue its work until the postponed 2020 General Conference is held in 2022.

The SEJ College of Bishops prepared the following FAQ to help explain the decisions and the process.

What is General Conference?
General Conference is the top legislative body of The United Methodist Church. It meets once every four years. Clergy (pastors) and lay (local church members) delegates are elected from every Annual Conference around the world to worship, pray, debate and vote as one body. Bishops preside at the sessions of the General Conference but do not have the privilege of voice or vote in its deliberations.

The General Conference works through a legislative process to amend The Book of Discipline, elect leaders for general church ministries, adopt a budget, and affirm plans for the shared ministry of the global connection of The United Methodist Church. Delegates also revise The Book of Resolutions containing the social principle policies and resolutions that guide the church toward justice and social holiness.

Is there a way to submit new legislation to the postponed General Conference?
The Commission affirmed the process for receiving petitions submitted after the original 230 and 45 day deadlines, noting that they will be treated and processed through the existing system of receiving petitions submitted after the deadline. The Committee on Reference is the appropriate body to determine whether or not to consider petitions submitted after the original 230 and 45 day deadlines, following the normal procedures and processes already contained within the Plan of Organization and Rules of Order. Petitions contained in the Advance Daily Christian Advocate may be amended in Legislative Committee to address any necessary changes such as dates or other content items.

Where can I read the legislation that is before the General Conference?
The Advance Daily Christian Advocate (ADCA) contains the agenda, rules, delegate listings, petitions, reports from the general agencies/commissions and study committees, information for delegates, and codes of conduct for the General Conference. You can download this publication at www.resourceumc.org/en/content/general-conference-2020-advance-daily-christian-advocate.

Where can I find out more about the Protocol of Reconciliation and Grace Through Separation legislation?
You can read the legislation, FAQs and more at www.gracethroughseparation.com.

How can I find out more about General Conference?
The latest information, including news, legislation and other resources is available at https://www.resourceumc.org/en/churchwide/general-conference-2020.

What is the purpose of the Special Session called for Saturday, May 8, 2021, in a virtual format?
The Special Called Session is for the purpose of gaining a quorum for: Will the Protocol of Reconciliation and Grace through Separation be considered in the Called Special Conference?   The only items that will be considered are 12 non-conflictual administrative matters that will allow us to function properly until the postponed 2020 General Conference convenes in 2022.  Once voted upon, these results will be certified, counted, and announced.

The Protocol of Reconciliation and Grace Through Separation and other legislation before the General Conference that have high potential for debate and amendments will be considered when we are able to meet in-person so as to allow full and equitable participation by delegates from around the globe. This aligns with the mandate of ¶511.4.d. of The Book of Discipline.

Since we are again postponing the 2020 General Conference to allow for full participation, why would we have a virtual Special Called General Conference?  This will allow us to gain a quorum (50% + 1) so that the rules can be suspended to allow for mail-in paper ballots.  These ballots will allow votes on 12 items that enable us to get unstuck as a church with nonconflictual matters such as meetings and quorums during times when General, Jurisdictional and Central Conferences cannot meet (i.e. a pandemic), allowing bishops scheduled to retire in 2020 to do so and process matters related to GCFA and the budget.

Will bishops be elected to replace those retiring at the called Jurisdictional Conferences?
This decision belongs to the delegates of each Jurisdiction.

The called jurisdictional meetings have been re-scheduled from the original November 2021 dates to July 2021.  These virtual meetings will retire bishops, announce any episcopal area re-alignments, hear from the College of Bishops who are responsible for providing coverage for the episcopal areas for the remainder of the quadrennium, determine if or how many bishops will be elected at the next in-person meeting and pass budgets.  Elections of new bishops will be delayed until it is determined that simultaneous in-person meetings can take place.

Note that in light of 5 of 13 Southeastern Jurisdiction (SEJ) bishops retiring, the SEJ College of Bishops is asking the jurisdictional episcopacy committee to make assignments in their stead.  Bishops are elders who itinerate, in consultation with authorized leaders of the church, and in this way we model the process of being sent to ministries in our connection.