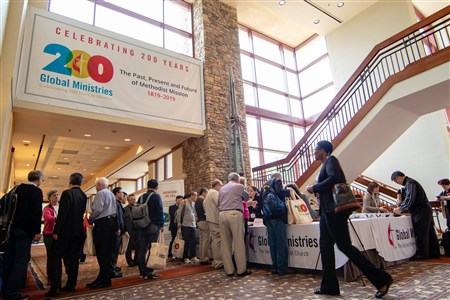 Celebrating its origins that trace back to the work of a freeborn African-American among the Wyandotte Native American people in the 1800s, the General Board of Global Ministries of The United Methodist Church celebrated its 200th anniversary with events focused on the future of Methodist mission during changing times.

“Mission has changed in the last 200 years, but Methodists remain a people deeply committed to mission in all its forms,” said Thomas Kemper, general secretary of UM Global Ministries. “The bicentennial recognizes the accomplishments and changes over the past 200 years while celebrating the present and future of Methodist mission, including how mission unifies all Methodists for God’s redemptive work in the world.”

As part of the bicentennial observance Global Ministries, in collaboration with Candler School of Theology of Emory University, sponsored a world conference of mission leaders and scholars. “Answering the Call: Hearing God’s Voice in Methodist Mission Past, Present and Future” was held April 8-10, 2019 at the Emory University Conference Center Hotel in Atlanta, to celebrate Methodism’s mission heritage and look to the future of Methodist mission.

While John Stewart was beginning his work among the Wyandotte people, Methodists in Great Britain were building on initial mission work in Ireland, the Caribbean, Canada, Sri Lanka and Sierra Leone. Local societies formed in the early years of the 19th Century to support mission. At its 1818 Conference meeting, the British Methodist Conference brought these initial societies together to form the Wesleyan Methodist Mission Society.

A half-century later in 1869, women in the Methodist Episcopal Church joined together to form the Woman’s Foreign Missionary Society, becoming one of the most significant women’s denominational mission societies globally and the forerunner to today’s United Methodist Women, celebrating 150 years in mission in 2019.

Together, these mission societies have been the main organizational vehicles for Methodists engaged in mission around the world. This history includes active participation in mission by Methodists from Africa, Asia, Europe, Latin America and the Caribbean, and North America.
News