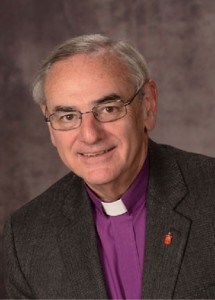 The Rev. Dr. Larry M. Goodpaster, resident bishop serving the Western North Carolina Conference, will join Emory University's Candler School of Theology in the fall of 2016 as the school's next bishop-in-residence.

As bishop-in-residence, Goodpaster will teach courses, preach and preside at chapel worship and ceremonial occasions, and offer counsel to students, particularly those seeking ordination in The United Methodist Church.

Current Bishop-in-Residence Woodie W. White will retire at the end of the 2015-16 academic term, but will continue to be part of the Candler community and assist with various programs.

Goodpaster earned both master of divinity (1973) and doctor of ministry (1982) degrees from Candler.

Ordained as an elder in The United Methodist Church, he served as a pastor and district superintendent in the Mississippi Conference. He was elected to the episcopacy in 2000 and assigned to serve the Alabama-West Florida Conference, where he served for eight years before moving to serve the Western North Carolina Conference in 2008.

Goodpaster has accrued an impressive record of conference and general church leadership, contributing his pastoral and administrative talents to such institutions as the Council of Bishops, Methodist Health Systems and 14 boards of trustees. In fall 2014, he was one of 56 recipients of Candler's Centennial Medal, recognizing extraordinary service to the school, the church and society.