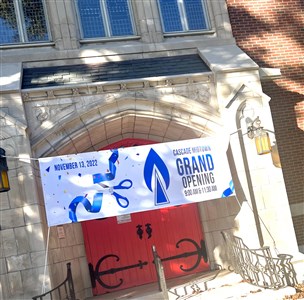 In March of 2022, Cascade UMC in southwest Atlanta and Grace UMC on Ponce de Leon Avenue in midtown Atlanta voted to approve a strategic merger with a vision for providing mission and ministry in new ways. The churches merged in June, and in July, the Grace campus became Cascade Midtown.

On Sunday, November 13, at 9 a.m. and 11:30 a.m., Cascade Midtown will welcome worshippers to its inaugural service.

The launch of Cascade Midtown creates a new, dynamic witness to the love and grace of Jesus Christ in Midtown Atlanta. Cascade has well-established roots in the city and hopes to see fruitful ministry happen for years to come while embracing a fresh and fuller vision of what it can mean to be God’s beloved community.

The property on Ponce de Leon Avenue is owned by the General Board of Global Ministries of The United Methodist Church and serves as the agency’s headquarters. Since its move to Atlanta in 2016, Global Ministries leadership has been committed to engagement in the mid-Atlanta location, adding to its own ministries of international mission and humanitarian assistance.

Cascade Midtown is utilizing the sanctuary, office space, and other identified spaces as needed. As Global Ministries moves to a partially remote work policy, space in the building has been leased also to Hope Atlanta, a non-profit which addresses homelessness and hunger in the city and with which Action Ministries recently merged.

The vision for Cascade Midtown, a satellite campus of Cascade UMC, is to form a diverse community around discipleship, service, and social justice in the East Midtown, Old Fourth Ward community of Atlanta.

All are invited to worship.