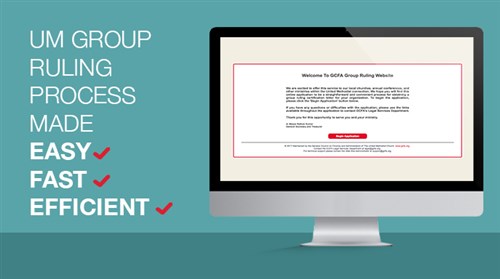 The legal team of The United Methodist Church's General Council on Finance and Administration shares the following information related to the UMC Group Ruling:

Fortunately, most of the problematic changes would not apply to organizations already included in our group exemption. Any changes included in the final version of the rules would only impact new applicants.

It’s important to understand these are currently only proposed changes. The release of the proposed rules was followed by a public comment period, which closed on August 16. GCFA’s Legal Services Department worked in cooperation with in-house counsel at several other denominations to submit a comment letter focusing on how the proposed changes would improperly hamper religious-based group exemptions. And while it is impossible to know what modifications, if any, the IRS will make in response to the comments it receives, we are hopeful the IRS will abandon some of the proposals that would place substantial administrative burdens on central organizations and/or unreasonably limit the ability to include new subordinate organizations. Although the expectation is it will be several months until the IRS publishes the final version of the rules, we cannot say with any certainty how long it will be before the new rules become effective.

Because of these uncertainties, we strongly encourage any United Methodist organization that wants to apply for inclusion in the group exemption to do so as soon as possible. This will allow us to process the application under the current group exemption rules (which remain in effect until the IRS releases the final version of the new rules).  To apply: We will continue to monitor this issue and pass along any important developments, including the content, impact, and effective date of the final rules, once available.
News