Knocking on Doors: Korean Church of LaGrange Grows Through Invitation 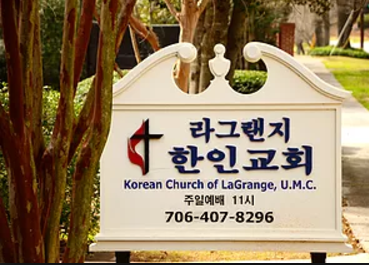 Founded in 2007, the Korean Church of LaGrange was established by the North Georgia Conference to minister to the increasing Korean population that was settling in the area. Koreans were moving to LaGrange to work at the Kia Motors Manufacturing plant that had recently located there. Seeing the potential, the conference appointed Rev. Dr. Daniel Kim in 2008 to serve full-timve.

“I went and knocked on doors in the Korean immigrant community, and visited them where they hang around, including Walmart and Starbucks,” said Rev. Kim. “I personally invited to our church each and every Korean Christian I met.”

Met with an extremely positive response, the Korean Church of LaGrange was born and became a pioneer for the successful launch of a Korean congregations in this part of the state.

“Suddenly there was a need, and we answered that need,” Rev. Kim added.

The personal outreach the pastor employed takes an extreme amount of time, to say the least. The North Georgia Conference contributed to Rev. Kim’s salary for four years so that the new church had sufficient time to be established. With very few members initially, according to Rev. Kim, he would not have been able to grow the church without the financial support of the North Georgia Conference.

To continue to grow and sustain its members, the church has offered an array of commonsense, but important support services to its congregants. A couple of the church’s non-Korean members, for instance, find their mission in working with the church’s children and youth, who all speak English, while older Korean members teach Korean to those same American-born, second generation members that can’t speak Korean well.

“As the new District Superintendent to the LaGrange District, I am grateful for the ingenuity Dr. Kim and his congregation have shown as a new movement in our area,” said District Superintendent Susan Landry. “They have grown because they care about the cause of Christ. Their love shines as they encourage people in their own lives and invite them to church. The world would be better if we all practiced our faith so well! Moreover, I want to commend LaGrange First United UMC for opening their doors to the Korean Church—God certainly blessed their efforts.”

For ten years, the Korean Church of LaGrange was what we refer to as a mission church, meeting in the LaGrange First UMC building.

Now at 130 members, the church is constituted and in the process of moving into their own building.

Rebecca Wallace is a communication consultant in Atlanta. This feature is one of a series on growing North Georgia Conference churches.