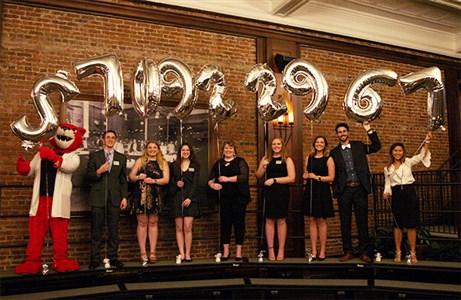 2/28/2019
Pouncer joins a group of students to announce the total amount raised during LaGrange College’s celebration of its “From Promise to Prominence” comprehensive fundraising campaign.

Friends and supporters of LaGrange College gathered last week to celebrate the successful conclusion of the “From Promise to Prominence” comprehensive fundraising campaign.

College President Dan McAlexander delighted the crowd when he announced that not only did the campaign reach its goal of $50 million, it surpassed it.

Pouncer, the college’s mascot, helped McAlexander announce the total with a game of “The Price is Right.” The president asked guests to guess a number that would be in the final amount. As each number was revealed, a student holding a balloon of that number joined Pouncer onstage until the final total was revealed – $70,922,967.

McAlexander said the campaign will change the lives of students and their families for generations to come.

“We are extraordinarily grateful to each and every one of you for your support, loyalty, love and extreme generosity,” he said. “LaGrange College is great because of you.”

“One of the best parts of this experience has been the opportunity to work with such a great group of people,” he said. “Rebecca (Roth Nicks, Vice President for External Relations) and President McAlexander make an amazing duo.”

Nicks thanked everyone for their work and contributions.

“This has truly been a transformational initiative,” she said. “We are celebrating more than money. Your generosity has impacted the students, faculty and entire college, and is helping shape the next generation of leaders.”

During a video presentation, students talked about how they know the college cares for them – from study abroad courses to leadership development, academic support to service opportunities.

Dr. Greg McClanahan, Chair and Professor of Mathematics, took the podium and praised donors for their commitment to students.
“Your efforts have had an enormous impact on our students,” he said. “Together, we have made an impact. You walk alongside every student on the Hill.”

The lead campaign gift of $8 million was made by Callaway Foundation, Inc., while Jerry and Janet Mabry Gipson Caswell donated $2.5 million, the largest contribution by living alumni.

Nicks said she is excited to celebrate the end of this campaign, but the work continues.

“We’re so grateful for everyone’s generosity, but with the growth of the college, there will always be needs,” she said. “We will continue to raise funds to prepare our students to become successful, responsible citizens who aspire to lives of integrity and moral courage.”

Georgia’s oldest private institution of higher learning, LaGrange College is consistently ranked among the South’s top colleges by U.S.News & World Report. A four-year liberal arts and sciences college affiliated with the United Methodist Church, LaGrange offers more than 70 areas of study with an emphasis on global engagement and service.