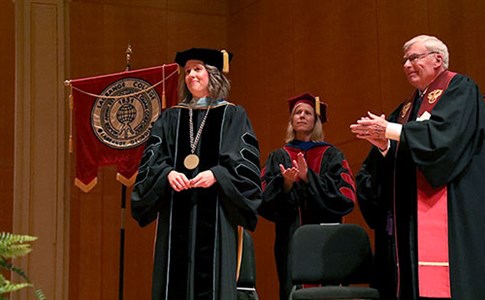 A pandemic at the time of Dr. Baxter’s July 2020 arrival on campus seemed to have come straight out of a novel, as she described in her inaugural address.

“Prior to 2020, if the author was going to write a fictional novel about a small liberal arts college in the midst of a presidential transition, the writer wouldn’t necessarily choose to drop the main character into the story at the beginning of a pandemic,” she said. “Unless of course, the author wanted to be accused of “jumping the shark”—a tale too outlandish to be believed.”
During her speech, Dr. Baxter gave thanks to her family, college leaders, faculty, staff and the students, who she said are the “champions of this story.”

“You have demonstrated your resiliency and adaptability,” she said. “You’re going to transform the world.”

Dr. Baxter encouraged her audience to “envision the possibilities,” the theme of inauguration week.

“We often limit our personal dreams and institutional aspirations when we think we’re not ‘more than’ the boundaries our limited experience and imagination have set,” she said. “We lift our eyes to the horizon to envision the possibilities, feeling God’s presence, and holding fast to our mission to challenge the mind and inspire the soul.”

Looking ahead, Dr. Baxter also spoke about the college’s five-year strategic plan approved earlier in the day by the Board of Trustees.

“At the heart of the plan is a declaration of our student-centered approach and a commitment to do even more in the service of students,” she said. “In the next five years our campus will be revitalized, our community renewed and our future amplified.”

The ceremony kicked off with a processional led by flag bearers, delegates, student organization presidents, faculty, staff and members of the platform party.

Seated at the front were alumni representing every class year from 1960 to the present. Sarah Funderburk from the Class of 1945 was the oldest alumnae.

The ceremony also featured two songs from the LaGrange College Singers and a poetry reading from Erielle Robinson ’22, who was selected in a contest hosted by the college’s English program.

At First United Methodist Church, the campus and community gathered Wednesday to offer prayers for Dr. Baxter and her family. Church, campus and community leaders participated in the service. First Gentleman Mark Huffman surprised the audience—and his spouse—with the message on the day of his wedding anniversary with Dr. Baxter.

The inauguration week concluded with a time of service on Saturday at Calumet Park. The college’s Wilkinson Family Servant Scholars presented their capstone project, which focused on their work with community building in the Calumet neighborhood of LaGrange.

Dr. Baxter was elected as the college’s 26th president by the Board of Trustees in April 2020, after serving as president of the Georgia Independent College Association for 10 years in Atlanta, Ga. She succeeded former President Dan McAlexander, who retired after 11 years of service.

At LaGrange College, Dr. Baxter is the second female president. Daisy Davies, a missionary, fundraiser and scholar, served as president from 1915 to 1920.

Georgia’s oldest private institution of higher learning, LaGrange College has been ranked as a top-ten school and “best value” among 93 Southern regional colleges by U.S. News & World Report. A four-year liberal arts and sciences college affiliated with The United Methodist Church, LaGrange offers more than 50 areas of study with an emphasis on global engagement and service.