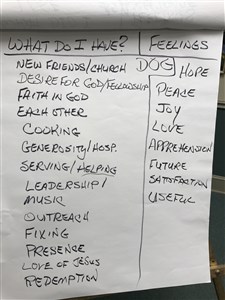 11/27/2017
Photo: Notes from a difficult conversation at Elizabeth Lee UMC.

In this broken world, churches are often called on the play the role of comforter and community healer. While it would be much easier to focus on uplifting worship, covered dish suppers and the “fun stuff” of church life, that isn’t how it works. With people hurting, communities struggling and families grappling with tough life and death decisions, congregations are called to minister in ways that are sometimes difficult and uncomfortable. Here are a few examples of North Georgia Conference churches who said, “Let’s talk.”

Human Trafficking
Pastor Kevin Lobello at Sam Jones UMC in Cartersville was surprised to learn earlier this year that human trafficking is a major problem in his community. Human trafficking can take several forms – from agricultural trafficking to prostitution. Essentially, it is putting young people in situations where they become dependent upon those who are exploiting them. While it is commonly thought of as an urban problem, it can actually be easier to hide in rural areas. Bartow County is one of the areas that state law enforcement officers are focusing on.

Earlier this year John Pinson, Northwest District Superintendent, and Herzen Andone, Director of Connectional Ministries, approached Rev. Lobello about hosting a program on human trafficking to help educate the community about the issue. They partnered with StreetGrace – a non-profit focused on stopping human trafficking – to host a community event at Sam Jones UMC. It was held on October 17 with about 100 people in attendance. Representatives from StreetGrace, law enforcement officers, and social workers held a Q & A session. Hearing directly from a victim of human trafficking was especially powerful.

Rev. Lobello and the congregation are inspired to get more involved in combatting human trafficking.

“Churches are in the redemption business,” he said. “We’re in every aspect of society – schools, courthouses, businesses. With our eyes and ears, we can become sensitive to it and report it.”

While it can be difficult to talk about uncomfortable topics, Rev. Lobello views it as essential.

“We need to have difficult conversations. We’re often too afraid of hurting people’s feelings.”

He adds, “Sometimes we need to be prophetic in our teaching and stand up for righteousness, human rights and the dignity of all God’s children.”

Healing Religious Divides
In the small town of Chickamauga in Northwest Georgia, Elizabeth Lee UMC and its pastor Rev. Jennie Andone found an unusual opportunity to minister to hurting people in their community. A local Baptist church, which had been central to the community for 70 years, had a dispute over finances and voted to oust the members who questioned the finances and pastor’s leadership. The church then disbanded, changed the locks and reopened with a new name. The ousted members, many who had belonged to the church their whole lives, suddenly found themselves without a church home. Relationships among longtime friends and even family members were fractured.

The congregation at Elizabeth Lee welcomed many of the former Baptist church members into their fold but also wanted to do something to help them heal.

“It’s a grief issue,” said Rev. Andone. “It’s a loss of a church home, family, facilities and ministries they had invested in. They lost a place to serve.”

This fall, she brought in a hospice chaplain, Rev. Alan Tarr, to talk with the members. Ten of the former members attended the workshop as Rev. Tarr helped them work through what they had lost, but also what they had gained. Since then, Elizabeth Lee has had one of the former Baptist church members join their congregation and several others attend the new member class.

The biggest lesson Rev. Andone learned: “We have to be to open to talking about how the church fails people and recognize that it can cause grief in peoples’ lives that needs to be addressed.”

Even when it’s not your church, it’s still your problem because people bring that baggage with them, she says. She is proud of “her folks” for reaching out and helping the community to heal.

Life and Death Decisions
Madison First UMC has been involved with blood donation drives, but Rev. Grady Mosely wants to take it further. The United Methodist Social Principles state: “We recognize the life-giving benefits of organ and other tissue donation and encourage all people of faith to become organ and tissue donors as a part of their love and ministry to others in need.”

Rev. Mosely is planning information sessions for his congregation on advanced directives, long term care arrangements, wills, and other end-of-life issues that individuals need to discuss with their loved ones. The congregation has tragically lost a teenager for the past three years in a row.

“In my 38 years as a pastor, I’ve walked so many people through this situation. It’s something everybody is going to face, so we might as well learn,” he said.

For the workshop, which he’d like to offer twice a year, he plans to bring in a lawyer and coroner to help guide people through the process. He especially wants to encourage organ donation as a something people can do an expression of their faith. Rev. Mosely’s father donated his body to science which has personally inspired him. He admits that it’s not exactly a comfortable conversation but he sees it as an act of love.

“I would want to someone to do it for me,” he said.

Rachel Quarterone is a writer, historian, and United Methodist in Atlanta.