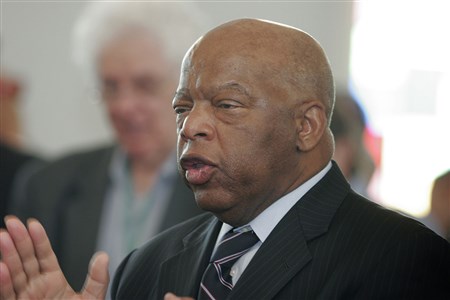 The Revs. John Lewis and Cordy Tindell “C.T.” Vivian were models of authentic religion who proved that people of faith can change a nation, said the Rev. James Lawson, a United Methodist pastor who worked side-by-side with both men in the early days of the civil rights movement.

Lewis and Vivian both died on July 17.

Congressman Lewis, an ordained Baptist preacher, died at the age of 80. Lewis represented Georgia’s 5th District, which comprises most of Atlanta and Decatur. He had announced in December 2019 that he been diagnosed with pancreatic cancer.

Vivian (pictured at right), who was 95, died of natural causes.

As Freedom Riders, both Lewis and Vivian were arrested and spent time in jails.

Retired Bishop Woodie White said Vivian and Lewis and others working with King saw nonviolent resistance as a principle.

“They lived it out and never strayed from it, no matter how difficult the resistance was,” he said. “It was faith-based and that is why they were able to go the distance.”

The Rev. Jasmine R. Smothers, pastor of Atlanta First UMC, shared that, as an Atlanta native, Lewis and Vivian were more than public figures.

"Growing up in Atlanta, Rev. C.T. Vivian and Congressman John Lewis weren’t just people you read about in history books or saw on the news," she wrote. "They were active and essential parts of our community--teaching for a day in our history classes, worshiping with us, grabbing groceries in the same grocery stores, eating dinner together in neighborhood homes. Regardless of what they were doing or where they were headed, they always stopped to remind us (especially the children) who we are, whose we are, and our responsibility to fight for equity and justice."

In his 1998 memoir “Walking with the Wind,” Lewis wrote of his hopes for the new generations of young activists.

“As a nation, if we care for the Beloved Community, we must move our feet, our hands, our hearts, our resources to build and not to tear down, to reconcile and not to divide, to love and not to hate, to heal and not to kill.”

Gilbert is a news writer for United Methodist News Service. Read the full article at https://www.umnews.org/en/news/lewis-vivian-proved-faith-can-change-a-nation.