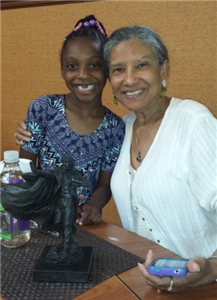 9/17/2019
(above) Lurma Rackley celebrating her birthday with her first granddaughter, Rallera. In the foreground is a birthday gift—a little statue of Frederick Douglass, one of Lurma's favorite historical figures.

(below) Lurma Rackley at age 13 or 14 with her mother in front of the elementary school from which her mother was fired for her civil rights work and membership in the NAACP. Photograph by Cecil Williams. Williams has produced several books chronicling the South Carolina civil rights movement and now has a digital project underway with United Methodist-related Claflin University to give people greater access to his collection.

Growing up in South Carolina, two things were constant in Lurma Rackley’s life: activism in the quest for equal rights and an unbreakable connection to the Methodist church. These constants were instilled in her by her mother, Gloria Blackwell (Rackley), who was a noted leader in the Orangeburg, SC, Movement for Civil Rights and Economic Justice in the late 1950s through 1964.

The church, Lurma says, was a major influence in her life. Her great-grandfather, Rev. LeGrand Lee Thomas, was a Methodist minister in the late 1800s in South Carolina. His daughter, Lurma’s grandmother, Lurline Thomas Blackwell attended one of the first boarding schools for black high school students founded by Methodists in Greenville in the early 1900s, and attended Claflin College, a Methodist center of learning for black students in Orangeburg. Mrs. Blackwell served as her church pianist and music teacher, and a school teacher for more than 40 years in Dillon County. She and her husband were among the early activists helping register black people to vote in South Carolina. 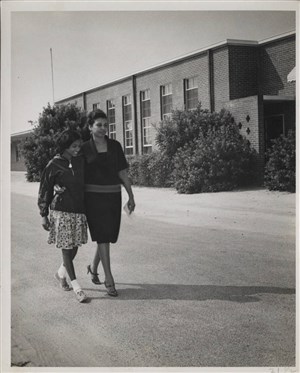 While growing up in Orangeburg, Lurma remembers making sandwiches and picket signs in the basement of Trinity Methodist Church until she and her sister were old enough to join the picket lines, too, in the early 1960s. Her direct ancestors and the ministers who were leaders of the civil rights movement “probably connected to the Methodist church because they were finding people of like minds;” she explains, “people who believed in actively working for social justice and equality to improve life for everyone.

“In South Carolina, the black ministers in the Methodist church were able to develop partnerships with some of the white ministers, perhaps more than leaders of other southern denominations were able to do at the time, which led to unification of the black and white church conferences.”

Later, Lurma applied her childhood lessons to her career. After graduating from Clark College (now Clark Atlanta University), Lurma received a special master’s degree in journalism from Columbia University in a program designed to help integrate the nation’s newsrooms. She started as a reporter in Washington, DC, at what was the afternoon daily, The Washington Star, and became an editor before leaving to work in local government in communications, including as press secretary to DC’s Mayor Marion Barry. She left government in 1991 and went on to work for both corporate and nonprofit organizations such as Amnesty International, CARE, and currently, Habitat for Humanity. Even in the corporate world, her work remained focused on social responsibility.

“I was always taught that doing good for others is the basic lesson we want people to learn as Christians; to treat everyone equally and to serve those that have less than we do.

“In my childhood and teenage years, the Methodist Church, especially, was the church of social consciousness. Even as we fought against racial segregation, we were taught to be open and welcoming. Our ministers drilled into us the Christian imperative to love everyone, not hate anyone; to always look at everyone through the eyes of love – even if those people were hating us, jailing us, hurting us.”

Today she sees a great deal of work to be done in her beloved church with regard to race, gender, and sexual identification.

Read more from our ongoing series to introduce one another to amazing North Georgia United Methodists — like you!
News