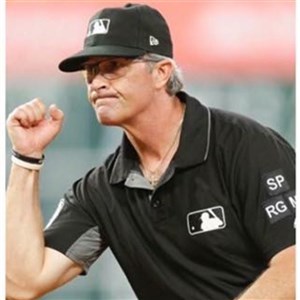 On Opening Day of the Major League Baseball Season, Paul Nauert took time to take a call from the North Georgia Conference and tell his story. That's how important his United Methodist church and his faith are to him. Just five hours later he was on on the field as umpire for the New York Yankees and the Baltimore Orioles season opener.

Although he was born and raised a church-going Catholic, Paul will tell you that he did not have a relationship with God as a young person. A bit of a wayward youth, he tried for and got into umpire school almost by happenstance. Without on-the-job experience, he initially worked little league and high school games. Once he committed to umpire school, he ended up finishing top of the class and then spent the next 11 years working his way up to the major league.

“Many don’t make it; some quit, and others just never get better,” explains Paul. “What set me apart? I think it was God’s blessing.”

Paul admits his faith was still not strong in 1999 when the umpire’s union struggled with the MLB and he was fired. It was a devastating time. He shares that he felt lost and abandoned. Everything he tried to do to win back his job was fruitless.

“I was so frustrated and depressed that I almost divorced my wife and lost my family,” he said.

About that time, he and his wife began shopping for churches. They settled on a local United Methodist church, and he was amazed at how his new church family rallied around him.

“Instead of despair, I saw joy everywhere I looked,” says Paul. “The hope, the way everyone prayed for one another, was so powerful to me.”

Paul then realized he had been placing too much importance on his job and not enough on God and his family.

“It took this crisis to see that I needed God and needed to love God more than anything else. I remember falling on my knees one day, crying out and finally surrendering to Him," he said.
"The loss of my job actually opened up a lot of things in me, and I really think it is when God did the most work with me. He got me to understand myself.”

Eventually, he did get his job back. And he's still an active member of Norcross First United Methodist Church.

The now 20-year veteran umpire has found yet another Christian community when he’s on the road. Every Friday at 4 pm umpires from all over the country join a prayer call. They support one other at retreats and through other regular interaction.

“Traveling is hard. This job can be hard,” says Paul. “I work in a hostile environment at times. But thanks to this group, I’ve learned a peace and calmness that helps me each and every day.”

Paul knows he is lucky to have an amazing job that he loves and an amazing wife that stuck by him through this journey. But he explains that it is actually the faith journey on which God has taken him that is the most amazing.

“I have done things I never thought I would,” he said.

Read more from our ongoing series to introduce one another to amazing North Georgia United Methodists - like you!
News