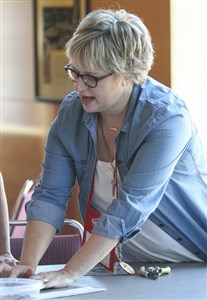 Like most of us, Kristen Vincent thought prayer beads were just for Catholics when her parents brought her back a rosary from a mission trip to the Dominican Republic. Nonetheless, she was totally taken by the fact that people used these beads to feel a connection to God.

“It really captivated me, so I started what became decades of collecting beads and rosaries and other things that people use to pray,” she said.

And then Kristen says she heard God telling her to make rosaries.

“I prayed about it, did some research and learned about the Protestant format for prayer beads developed in the 1980’s. That’s when my calling made sense,” she said.

Though she has a seminary degree and is married to a pastor in the North Georgia Conference, Kristen enjoys a full-time career of holding prayer bead workshops, teaching and writing – including for the Upper Room, for which she’s published three books and a devotional.

“The response to the books has been overwhelming!” she adds. “So many people have said to me, ‘Wow - You mean we get to pray with beads, too??’”

A member of St. James UMC in Atlanta, Kristen says she is truly honored to be able to share this gift with others throughout the North Georgia Conference. “People are hungry for new ways of praying and for things that remind them of God’s presence.” 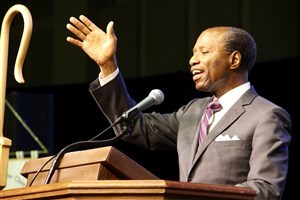 Speaking of new ways to remind us of God’s presence, Ralph Freeman, a dedicated United Methodist layperson, shares his gift of song for that very reason. His unique method of singing and speaking engages the listener to hear the Good News. A member of Dunwoody UMC, Ralph has traveled across the United States and in many other countries to answer God's call for him to “encourage the faithful and evangelize the seeker,” as he puts it. (He's pictured leading the North Georgia Annual Conference in song.)

“Initially, I did not choose music as a vocation,” says Ralph. Though he sang with the Atlanta Symphony Orchestra Chorus during his senior year in college, he received a Bachelor of Science Degree with concentrations in Mathematics and Physics and headed to the corporate world. “It wasn't until I had worked for IBM nearly 10 years that God called me to use my musical gifts in ministry.”

As a young man, Ralph became involved in the North Georgia Conference UM Men's ministry, which eventually was a “springboard” into ministry with local churches. He went on to sing at the annual Men's Retreat at Rock Eagle for more than 40 years.

Now, Ralph reaches out to churches, seeking opportunities to share Song Sermons. More than anything, he wants to be a support to pastors and to be an extension of their ministry.

“My calling is more than entertaining and performing – it's about growing Disciple of Jesus,” he said.

Sometimes gifts we share can be pure entertainment, or at least an entertaining vehicle to show God’s love. 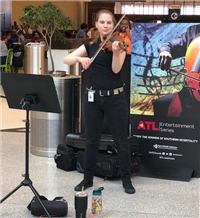 On most Friday and Saturday mornings, you can find Michelle Winters playing the violin at the Hartsfield Jackson Atlanta International Airport as a part of the "ATL Entertainment" series. A member of Mount Pisgah UMC in Johns Creek, she considers it a ministry. While it may not seem like the "transformation of the world," Michelle gets through to people in long lines for TSA security or a long layover, and it's obvious that they enjoy the live music. Michelle thinks it gives them a sense of relief.

“Hospitality is a big part of being a church,” explains Michelle. “From this opportunity, I’ve learned how important it is to remember that God is with us all the time. God truly creates everything on this earth and cares for us, even when things aren’t going as great as they should be.

“One of the most touching moments for me was when a woman was traveling to see her dying father. She was unsure of his health by the time I saw her, and her only sense of relief was my music. I could tell that God wanted to use me as a way to tell her that no matter what, everything will be okay,” said Michelle.

What these three North Georgia United Methodists have in common is that they all recognize that being able to share their gifts is, in turn, a very powerful gift to each of them. For more information and how to take advantage of these gifts, please contact Kristen at kevincent619@gmail.com, Ralph at Ralph@ralphfreeman.com, and Michelle at mwintersviolin@gmail.com.