In Legislative Committee, Majority Vote to Advance Only Traditional Plan and Disaffiliation Plans 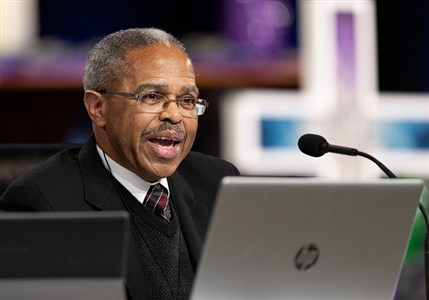 Today the body only sent forward the Traditional Plan with amendments and two plans that allow churches, with some limitations, to leave the denomination with their property. Yesterday afternoon they forwarded two plans relating to Wespath.

It did not send forward the One Church Plan, the Connectional Conference Plan, or the Simple Plan.

Bill Stikes asked a helpful question on the ability of the body to refer legislation to the Judicial Council. The answer came back after research to confirm that the body was able to ask for declaratory decision from the Judicial Council. Rev. Dr. Phil Schroeder suggested an amendment to legislation that would include funding for new church starts as a condition of exiting churches. That amendment did not pass. Rev. Chuck Savage spoke in favor of a Disaffiliation Plan which will go forward to the body tomorrow.

Rev. Dr. Byron Thomas spoke in favor of the One Church Plan reminding the delegates of mistakes of the past, and that as the church we are still striving for perfection. He implored the delegates to consider a more faithful stand where we continue to grapple with the things on which we disagree while we stay in ministry in the ways we excel like UMCOR and Africa University. Lathem Postell spoke to the possibility of unity that could be found in the Connectional Conference Plan.

After closing worship General Conference Secretary Gary Graves held a brief press conference. He shared that in addition to the legislation being sent forward by the body today, other plans could come back as minority reports.

He also shared that opening briefs of the Judicial Council's declaratory decision are due by 9:30 pm CST and reply briefs are due by 10:30 pm.

Tomorrow delegates will meet in plenary session where they will vote on the plans before them.