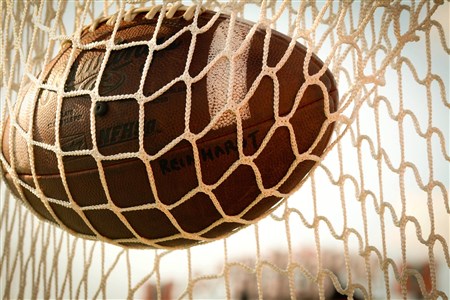 For Gray Nichols, football has taught him more than play calls and drills. He tries to live his Christian faith through school, football, and everyday interactions. This year he has grown in his faith and become more than a football player.

Nichols is a member of Lewis Memorial UMC in Evans, a small town outside of Augusta. He graduated from Evans High School and now attends United Methodist-related Reinhardt University in Waleska. He says growing up in church teaches you the value of family, faith in God, and faith in others.

“On the field everyone out there with you is your family no matter who you are,” says Nichols, “and faith on the field is having faith in your teammates that they are going be in the right place and do the right thing.”

Once starting center for Evans High School, Nichols also plays Guard, Defensive Tackle and Nose Guard. He was selected to play for USA Football National Team Development Games in 2016. Through this program, coaches and players have the unique opportunity to develop, train and compete with the elites in the nation and the world.

Through this, Nichols has had incredible opportunities and even received a scholarship to play at Reinhardt University. He says the day that Reinhardt offered him a place on the football team was a day he could hardly forget.

“It started as a normal day, I went to school, practice and when I got home after practice I got a text from the head coach saying that he wanted to talk to me and to contact him as soon as I could," said Nichols. "Shortly after I called him he told me that he liked what he saw when I came to work out with the team and that he would like to offer me [a position].”

Nichols says that football brought him closer to God by showing him the discipline and the effort you have to put into something to get what you want back.

“I think that God has used me by showing other people that if you believe in God and follow him that he will place you where he wants you to be and use you there,” says Nichols.

He learned from example how important faith in God is in a person’s life. His whole family are active United Methodists with mission-minded hearts for the Lord. His grandparents are missionaries in Ecuador and he is so proud of them, but says it’s not always easy.

“Having my grandparents serve as missionaries is probably one of the hardest things I’ve gone through,” says Nichols, “It was hard because up until then I was always with them on every weekend and basically any night that I didn’t have school the next day.”

Nichols' uncle serves as Director of Youth Ministries & Young Adult Ministries at Lewis Memorial UMC. He says his uncle undoubtedly is one of the most important people in his life.

“He brought me into youth group when I was ten, where one day I would be the president. ... He also showed me how to act and show the people the way of the Lord just through your presence, by acceptance of everyone and showing kindness as well.”

After college Nichols says he wants to start his own business where he trains high school athletes that want to get to the next level.

“I take every day as it is and the blessing it is,” he says, “I believe that we as humans are not guaranteed everyday so I will give it my everything in all the things that I do.”

Jessica Bradford is Communications Specialist for the North Georgia Conference.