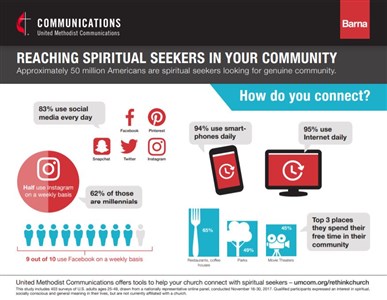 A new survey of spiritual "seekers" finds that the top motivators for considering a church are knowing that everyone will be welcomed (32%), making friends and nurturing friendships (29%), support during difficult times (28%) and learning more about God (27%). Less motivating are opportunities for Bible study, volunteer opportunities, discussions of issues and topics and the provision of child care. (Download the infographic here.)

The survey, conducted by the Barna Group on behalf of United Methodist Communications, included people aged 25-49 who consider themselves spiritual, socially conscious and seeking meaning in their lives, but who are not affiliated with a church.

“The findings point to a desire for genuine community,” said Dan Krause, general secretary of United Methodist Communications. “About three-quarters of those who might visit a church said that having friendly and welcoming people might cause them to continue attending.”

Among survey respondents, women were more interested in being welcomed into a church and the relationships that might develop, while men were relatively more interested in knowledge about God. About one in three said they do not believe church has anything to offer them.

Enjoyable sermons and insightful teaching rank high as attractive church characteristics among both men and women, and were twice as likely to be named as a motivator than the worship experience.

What do spiritual seekers spend their time doing? Two-thirds spend free time at restaurants and coffee houses, especially high-income earners and those without children, while parents are more often found at parks. Prayer is the most common spiritual activity, practiced daily or weekly by 48 percent of respondents, followed by spending quiet time alone reflecting on spiritual life and spending time reflecting in nature. More than 90% use smartphones and Internet daily, while 83% use social media every day and about half watch TV or listen to radio.

“This data provides insights into how and where churches can connect with people who may be looking for a faith community where they can belong,” said Krause.

Ninety-four percent have heard of The United Methodist Church and about half are familiar with it. More people have a favorable impression than not, though about half have no opinion. The denomination’s tagline, “Open hearts. Open minds. Open doors.” was considered somewhat or very appealing to 88 percent of survey respondents. Among those who are more educated, those in the Midwest and South and those who live in small town or rural areas, The United Methodist Church is regarded somewhat more favorably than in other parts of the U.S.

The study was conducted in November 2017 and included 606 interviews with a nationally representative sample of U.S. adults drawn from an online panel. Individuals on the panel were screened to identify people who met criteria identifying them as a “seeker.”

The results of the survey were not markedly different from a similar survey conducted in 2015, although the definition of a "seeker" was adjusted to be somewhat more targeted. As a result, respondents in the 2017 survey were more likely to be interested in spiritual matters, yet less likely to be immediately open to attending church.

Want to hear more about this study? Watch UMCOM's Facebook live broadcast at facebook.com/umcom Friday, May 18 at 11:00 a.m. CT or check the Facebook page afterwards for the archived broadcast.