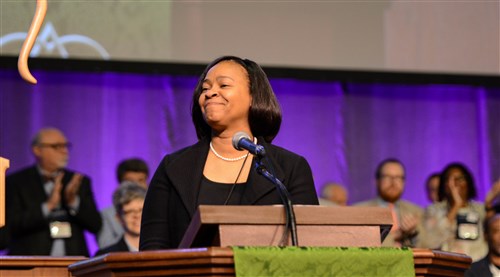 6/8/2016
Rev. Sharma Lewis endorsed as episcopal nominee by the North Georgia Annual Conference
With a "Glory Hallelujah" the Annual Conference endorsed the Rev. Sharma D. Lewis as the North Georgia Conference episcopal nominee.
The vote of affirmation followed a motion made by Mathew Pinson, Delegation Chair, on Tuesday, June 7, during the first session of the 2016 gathering. Bishop Watson led the conference in prayer for Rev. Lewis.

The members of the North Georgia Conference Delegation unanimously endorsed the Rev. Lewis as their episcopal nominee in September.

Rev. Lewis currently serves as District Superintendent of the Atlanta-Decatur-Oxford District. A native of Statesboro, Georgia, she is a life-long United Methodist. Rev. Lewis is a graduate of Mercer University, with a Bachelor of Science degree in Biology, and a graduate of the University of West Georgia, with a Master of Science degree in Biology. Prior to following her call to ministry, she was a biologist in the academic and corporate sectors. After answering God’s call to ministry, she entered Gammon Theological Seminary in Atlanta where she earned the Master of Divinity with honors.

Rev. Lewis is the recipient of the 2010 Harry Denman Evangelism Award and the G. Ross Freeman Leadership Award. She has served on numerous committees, boards and task forces representing The United Methodist Church, including leading the 2012 and 2016 North Georgia Clergy Delegations to General and Jurisdictional Conference.

In The United Methodist Church, bishops are elected and assigned by the Jurisdictions. The Southeastern Jurisdictional Conference will meet July 13-15, 2016, and Rev. Lewis will be considered for election as bishop.
News