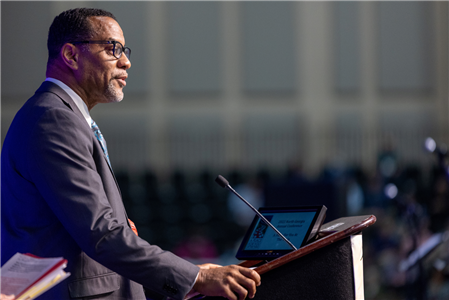 The vote of affirmation followed a motion made by Jane Finley, head of the North Georgia Conference lay delegation to the General and Jurisdictional Conference, on Friday, June 3.

The members of the North Georgia Conference Delegation had already endorsed Dr. Thomas as their episcopal nominee in January 2020 and reaffirmed their endorsement before the Annual Conference Session.

Rev. Dr. Thomas currently serves as District Superintendent of the Central South District which covers DeKalb, Henry, Newton, and Rockdale Counties. He is chair of the North Georgia Conference Delegation to the 2020 General and Jurisdictional Conferences.

Rev. Dr. Thomas has served appointments as senior pastor at Ben Hill UMC in Atlanta and Central UMC in Atlanta, as Associate Director in the North Georgia Conference Office of Connectional Ministries, and as pastor at Fort Street United Methodist Church in Atlanta.

He served on the Atlanta-College Park District Board of Ordained Ministry and as the Chair of the District Committee on Superintendency. He has twice served as Chaplain and Educational Liaison at Wellroot and has chaired the Board of the Interfaith Children’s Movement (ICM). He is a recipient of the Malone Dodson Award given by the Foundation of Wesley Woods to a clergyperson who best exemplifies visionary and committed leadership with respect to older adults. He has served as president of the North Georgia Black Methodists for Church Renewal and coordinator for the Southeastern Jurisdiction Black Methodist for Church Renewal. He has served as a Clergy Delegate to the 2016 General and Jurisdictional Conferences and the 2019 Special Session of the General Conference.

A native of Aliquippa, Pennsylvania, Rev. Dr. Thomas is a veteran of the United States Air Force. He earned a Bachelor of Arts degree in Religion and Philosophy from Virginia Union University in Richmond, Virginia and a Master of Divinity degree from Perkins School of Theology at Southern Methodist University in Dallas, Texas. He also holds a Certificate in Executive Leadership from McCormick Theological Seminary in Chicago, Illinois. In 2016, Pastor Thomas graduated from the Association of Chicago Theological Schools (ACTS) program with a Doctor of Ministry (D.Min) in Preaching through McCormick Theological Seminary.

He is married to DuWanna and they are the proud parents of two wonderful sons.

In The United Methodist Church, bishops are elected and assigned by the Jurisdictions. Twice postponed due to COVID pandemic, the Southeastern Jurisdictional Conference has been set for November 2-5, 2022 for the purpose of electing bishops.

Learn more about the upcoming Southeastern Jurisdictional Conference at www.ngumc.org/SEJ2020.